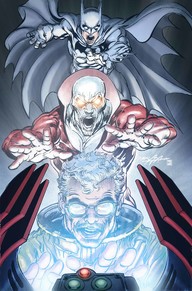 I have so much respect for Neal Adams.  He’s one of the few legends of the comics renaissance that began in the 1960’s that is still alive and active.

His work is one of the reasons that I’m still an avid fan in my sixth decade of reading and collecting comics (OMG!). When I became a teenager I decided it wasn’t cool for me to continue reading comics. I was interested in dating and didn’t think girls would approve of comics. I was wrong, but I thought differently at the time (1960’s).  It was Neal’s work in UNCANNY X-MEN and GREEN LANTERN/GREEN ARROW in the late 1960’s that brought me back as a comics reader. I feel obligated to check out anything current with Neal Adams’ name on it.

Deadman is an infrequently used DC second-tier character with a long history.  He first appeared in DC’s STRANGE ADVENTURES (1967) created by Arnold Drake and illustrated by Carmine Infantino. After the initial issue, Neal Adams took over as artist, and later would write the series as well. He now returns as writer/artist once more to the character he helped develop so many years ago.

The art in this new DEADMAN is typical of Adam’s photo-realistic style as well as angular overlapping panels and emphasis on lighting and body language. The story is intriguing and from as much as can be determined after one issue, looks to have a good plot.  But there is a singular flaw that may prevent this book from garnering a more deserving audience.

Adams seems to assume that readers will be familiar with the backstory of Boston Brand a.k.a. Deadman and doesn’t devote much time to sharing his origin. Former readers of Deadman won’t have any trouble, but I doubt that anyone new to this character will be able to figure out exactly what is going on.  Adams doesn’t describe the powers of Deadman — he shows them through action. Green waving lines appear when Deadman drops into other characters to take control of their bodies.  There are also some twists including impersonation that require the reader to carefully scan the art to determine exactly who is who and when. It can be disorienting.  While I appreciated it more after a second reading, I’m concerned many readers will be frustrated early and won’t have the patience to figure it out.

Adams also takes liberties with the relationship between Boston Brand / Deadman and Bruce Wayne / Batman and doesn’t devote any space to letting readers know why they are so familiar with each other.

The story lays the framework for the issues to come, and is already more complex than usual.  The flashback scenes reveal that Deadman’s death may be connected to the League of Assassins, and not for very noble purposes. This upsets Brand and fuels his rage and frustration.  This version of Deadman is obsessed with the details of his death and tracking down his alleged killer, who goes by the code name of The Hook.  He’s also prone to fits of rage and over-the-top outbursts, particularly in his interactions with Batman/Bruce Wayne.

How and why Commissioner Gordon and Batman are involved and why they, along with Deadman, begin the story in Japan is left for the reader to figure out.  Batman seems to think Ra’s al Ghul is somehow involved.  The promotional information for this title reveals that Zatanna, The Phantom Stranger, Dr. Fate and the Spectre will be involved before it all ends - -  so we’ve only seen one layer of the story so far.

I have to admit the story-telling style annoyed me on the first reading, but I’m going to support Adams on this one and stay with it. 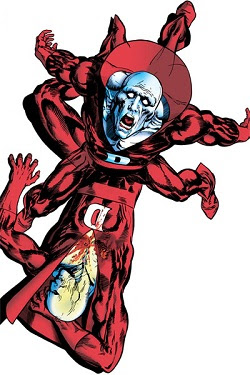 STORY:  Sorry to state this, but it’s going to take some patience for readers to follow this story.  Credit Adams for developing a complex plot and not taking the easy route. He may have taken on too much, with writing, art, and coloring. Hate to say this, but he would benefit from a collaborator on the script.   1.5 POINTS.

ART: I love Adams’ style, which may not seem so exceptional to today’s comic reader - but it was groundbreaking in the ’60’s and ’70's. He’s owed a debt of gratitude from so many artists. 3 POINTS.

COVER: A great example of how Adams uses depth and perspective to create intriguing images.  2 POINTS.

READ AGAIN?  It’s necessary for full understanding of the story. If you don’t, you won’t enjoy this book. Take a half-point away from the possible score of one point.  0.5 POINTS.

RECOMMEND? For Deadman and Adams fans, yes!  For others, I suggest you spend a few minutes looking over the book before you decide to buy.  0.5 POINTS.

TOTAL RATING: 7.5 POINTS out of a possible 10. Slightly above average.  I’m in for sure. Others will need to decide.