NINJA-K: Easily the best book of the November crop 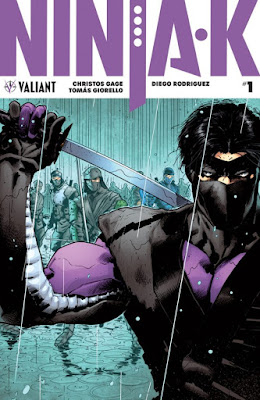 As the credits page proclaims, the history of British MI-6’s Ninja program is deep and wide.

The debut issue of NINJA-K begins by tracing that history starting with the first operative’s (Ninja-A) initial operation in World War I Austria in 1917. Writer Christos Gage lays out the development of the program with interesting details, bringing readers up to the present day and the activities of agent Ninja-K, Colin King (who also serves as a freelance mercenary).

Six years ago, King received the history lesson plus advice courtesy of Ninja-D, now a consultant whose glory days of the late 1950’s and 1960’s are well behind him.  Flash forward to present day and K applies D’s lessons to survive a nasty scrap and rescue a hostage.

King is enjoying his independence from MI-6 and adjusting to his new residences (his castle was destroyed) when he gets called back. Three former Ninja operatives have been murdered. Also, D may have a secret past that K is just beginning to learn about. 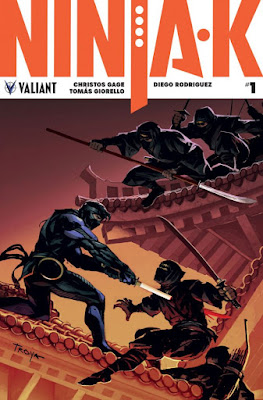 STORY:  Christos puts his own spin on both Colin King and a cleverly thought-out backstory of the Ninja program at MI-6, He adds a new love interest, and ends up revealing King’s vulnerabilities and insecurities. Dialogue is believable and well-done.  3 POINTS.

ART:  I love the art of Tomas Giorello and detect both Steranko and Gulacy influences in his style.  Action scenes are awesome. Close-ups are very expressive.  There are more colors in Diego Rodriguez’s color palette than I am used to seeing, and the results are incredible.  3 POINTS.

READ AGAIN? I rushed through it the first time. The book has a real flow and the transition scenes are smooth. It took a second reading to pick up all the finer points that Gage weaved into the story. I suspect there will be a third reading.  1 POINT.

RECOMMEND? This is what we want from comics. Great stories, enhanced by great art.  1 POINT. 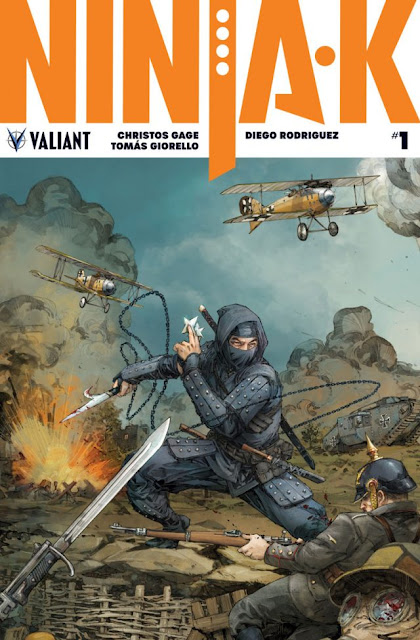