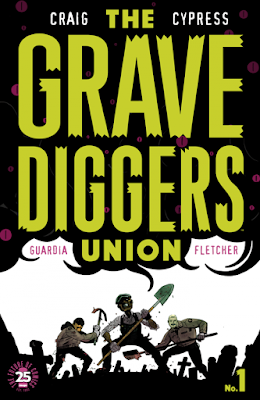 I read about this book in one of the Image Comics monthly preview magazines and was compelled to pre-order it. What really grabbed my attention were the samples of Wes Craig’s art.

That art opens the story in Issue #1 and it’s just so rich in imagery and detail that I wish he was able to draw the entire issue.  Those five pages of almost text-free panels depicts eerie scenes of early Earthly ancestors (apes) carrying large lima-bean shaped wriggling sacks in a long trail leading to what appears to be a giant tree/hive mass with luminous eyes. Creepy, in a word. A strange bit of foreshadowing.

Don’t misunderstand. The rest of the art by Toby Cypress is engaging and very graphic in places.  It just has such a tough act to follow. Those first five pages established a disturbing tone that gets replaced with a more light-hearted, often humorous approach to the rest of the issue. I was a little disappointed.

However, the rest of the issue is what the main story in THE GRAVEDIGGERS UNION is all about. It’s the end of the world, including devastating ghost-storms, zombies on a rampage, junk-golems, and vampires running through the jungle. The Gravediggers Union media spokesperson says “everything is under control” but the quintet of workers we follow through the story have their hands full trying to keep things in check.

Cole, the most outspoken of the crew, senses more powerful forces at work and feels they need to expand their operation beyond the graveyard. Cole wants to cross enemy lines and consult with a witch.  They have to travel to the local members hall to get the union steward’s permission to do so.

Seems like a simple enough story. But, the introductory text piece by Wes Craig indicates that there is more in store, including a cult called The Black Temple.  I’ll be back for Issue #2 for sure.

STORY:  What may confuse some readers is that the story elements seem serious while the art looks to be making fun of it. It’s a delicate balance.  I like where Craig is taking this, and want to read more.  2 POINTS.

ART: Mixed feelings, due to the eye-popping opening sequence. Perhaps I’d be a little more supportive if I hadn’t been teased at the beginning. Craig mentions that he was going for an EC, pulp style look in his choice of collaborators — and he achieved that. However, it doesn’t always work and can be distracting - - the red smudges on many pages are intended to resemble bloody fingerprints (I think) but they interfere and take away from appreciation of the art. And the lingering evidence of zip-a-tone and ben-day dots also draws the attention away.  2 POINTS.

COVER: Almost obscured by the large logo. But the lower image of angry shovel-wielding men in a  graveyard makes the point. 1 POINT.

RECOMMEND? Yes. I think this is a story worth following. I’m also hoping to see some more of Craig’s spooky scenes along with the entertaining work of Cypress. 1 POINT.