I read the first six issues of DC/Vertigo’s AMERICAN VAMPIRE  from 2010. It was writer Scott Snyder’s first published work in comics and helped cement his reputation at the top of the new crop.  Collaborating with Stephen King also does wonders for the resume.  The success of AMERICAN VAMPIRE helped Snyder get the writing assignment on Batman.  His introduction of the Council of  Owls to Gotham mythology is first class.  So is AMERICAN VAMPIRE. 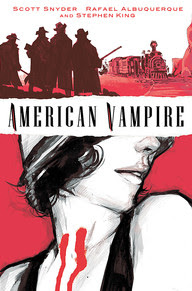 The storyline follows the origins of a new breed of vampire - - the American vampire, meaner than the European strain and also immune to the effects of sunlight. The other difference is the ability of a full moon to somehow drain the vampire’s energy, leaving them in a weakened state.

AMERICAN VAMPIRE follows two of the new United States vampires, one written by Snyder and one by King.  Snyder’s creation, Pearl, a young woman hoping to break into movies in 1920’s Hollywood who gets noticed by a prominent actor. His attentions lead to an invite to an exclusive dinner party where unsuspecting Pearl finds herself on the menu. She seeks to get the upper hand on the European vampires who abused and tortured her, thinking they killed her.  King’s story is set in the American Wild West, where a candy-loving bank robber named Skinner Sweet runs afoul of the same group of elite European vampires and meets a similar end — but also does not die. The stories of Pearl and Sweet later overlap and they end up working to similar purposes.

The first story arcs of both characters concludes with Issue #5. Issue #6 moves forward in time to Las Vegas in the mid-1930’s during the construction of the massive dam.  Synder takes over full scripting duties, and introduces the second intriguing storyline.  The art by Rafael Albuquerque helps tell the tale in bloody details. A great read.  Definitely worth my time to visit it again.

I also re-visited DC/Wildstorm/Homage Comic’s RELOAD three-issue limited series from 2003. The creative team on this political thriller are writer Warren Ellis, penciler Paul Gulacy and inker jimmy Palmiotti.  Big on action, this fast-paced barnburner deals with corruption in the White House.  Trained as part of a secret government anti-terror group, a female agent quits and goes on a killing rampage to eliminate the President and his Cabinet. There are text-free panels galore of fluid choreographed fight scenes that Gulacy excels at. Worth the price just for the art. Ellis also manages to cram a lot of story into three issues, with counter-plots and twists to make your head spin. This would easily be a five or six issue series in today’s comics publishing.

Since the JUSTICE LEAGUE movie debuted last week, I decided to revisit the 2011 New 52 re-boot of the DC title (Issues #1-6).  It serves as a neat introduction to the team, with a few character quirks and attitudes to keep it interesting - although none of the characters are fully developed yet.  The story is good but I expect better than good from Geoff Johns.  However, the Jim Lee art is stunning, with lots of full page and half-page masterpieces.

BATMAN: LEGENDS OF THE DARK KNIGHT #207-210, a five-issue story arc (“Darker Than Death”) from 2006 by Bruce Jones and Ariel Olivetti.  Moody, atmospheric tale of millionaires, mobsters and mystery. Psychological insights into Batman’s character. A brief appearance by the Penguin, the only super-villain featured at all in the story. This was a good one.

Even better than that was BATMAN / TWO-FACE a short graphic novel from 1995 by J. M. DeMatteis and Scott McDaniel. Deep, reflective and hard-hitting, as it deals with the two-faced nature of child abuse.  Father loves son but beats him and then blames the son for the abuse, leaving psychological scars along with the physical ones.  Moody art by McDaniel, who altered his style to pay homage to both Steve Ditko and Shane Davis. 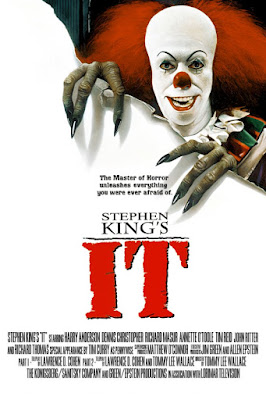 I didn’t see the new version of Stephen King’s IT in theaters, but hope to catch it on cable or a future Redbox rental.  However, back in September SyFy Channel broadcast a slew of old movies during their 25th anniversary celebration.  I recorded the original 1990 four-hour t.v. mini-series of IT, and started watching it this week.  It is awesome.  I’ll have more to say about it later.

I read WHERE MONSTERS COME FROM e-book from Crystal Lake Publishing, a non-fiction collection of articles and essays about writing horror which I will post a review of later this week.  I also started reading MY FAVORITE THING IS MONSTERS from Fantagraphic Books.  Wow. It’s an amazing debut.  More about this later.

See you next week.