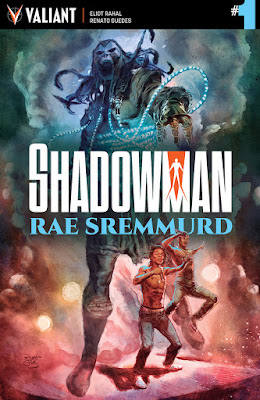 I’ve only read two single issue stories by Eliot Rahal, but he’s impressing me with his skills.  If I hadn’t already pegged him as the author of my favorite stand-alone story of 2017 so far, then I might be picking this book for those honors.  It comes close.  It just lacks the emotional impact of Rahal’s other story. However, it’s a totally different theme as well as a different tone he utilizes for telling this new story.

In the BLOODSHOT’S DAY OFF one-shot, Rahal showed great compassion in a tale respectful of everyone working in the armed services. (See my review here:http://bcrefugees.blogspot.com/2017/07/new-comic-wednesday-review-bloodshots.html  ).  With SHADOWMAN/RAE SREMMURD he merges mythology with music and takes a light-hearted approach to the proceedings.

The story is a tribute to classic tales of individuals who sell their souls to the devil in exchange for fame and fortune. Turns out it’s not Satan who secured the blood contract but a lesser demon who grows in energy and influence by having these bands play and entertain the demonic multitudes in Hell. The agent for Rae Sremmurd contacts Dr. Mirage to try and get them out of Hell, and she enlists the assistance of  Shadowman (already inhabiting the Darkside).

The story opens with a flashback to a 1930’s Mississippi crossroads, where a struggling unidentified guitar player makes a pact with a demon in exchange for success. Music fans will recognize this re-enactment of the urban legend surrounding how Delta blues artist Robert Johnson achieved his fame.  Flash forward to present day and the same demon (now revealed as a bartender) persuades mattress factory workers and hip-hop enthusiasts Jim and Swae to sign a similar contract in exchange for five years of glory and easy living before he owns them body and soul.

The art (including inks and colors) is spirited and powerful and completely suited to this type of story.  The images come to life in a blending of photo-realism and painting that are simply gorgeous to view.  The book is worth the price of admission on the art alone.

SHADOWMAN/RAE SREMMURD has received mixed reviews.  Some critics took exception to the inclusion of the hip-hop duo Rae Sremmurd, and felt that the book was solely an excuse to showcase them.  I’m not sure how involved they were in the scripting of this book aside from lending their name to it and agreeing to be featured characters in the story.  Perhaps they pitched the idea to Valiant and were partnered with Rahal.

However, since selling out to Satan is not something for artists to brag about since it questions their musical credentials otherwise — at least give them credit for allowing Rahal to depict them in a less than favorable light. Truth be told, while this story hinges on a musical artist taking the wrong path in their career progression, it could have been any group.

Others felt that it did nothing to advance the development of Shadowman, a character of great potential that has been mostly under-utilized and neglected since the beginnings of the Valiant universe back in the 1990’s, and facing similar issues with the current version. While you don’t learn much about Jack Boniface in this story, his dynamic presence and strong participation should encourage some readers to investigate further.

From where I sit (in my comics equivalent of an armchair quarterback), I’ve  noticed a renewed interest in comics on the part of musical artists of all genres.  I neither welcome nor discourage that.  As long as a good story is being told, I’m satisfied. And this remains a very good story — and a rarity at that because it’s a complete-in-one-issue tale. You don’t have to read anything else before or after.  Readers can pick this up, get a little introduction to Shadowman and the Valiant universe, and enjoy a good read.

STORY:  I loved Rahal’s take on demonic contracts and the light-hearted approach he took. There are numerous asides that fans of music and mythology will enjoy, especially the use of Charon the ferryman and the river Styx.  2.5 POINTS

ART:   The style is perfect for these types of stories. Coloring and shading is spot-on.  3 POINTS.

COVER: The main cover is attention getting, and the inter-locking variants that feature partial close-ups of Rae Sremmurd and Shadowman are amusing. 1 POINT.

READ AGAIN? Multiple readings are needed for full appreciation of a complete story told in one sitting. It’s not easy to do this in today’s comics atmosphere, so we’ve got to recognize when it’s done well.  1 POINT.

TOTAL RATING: 8.5 POINTS. Well above average. Near the top. 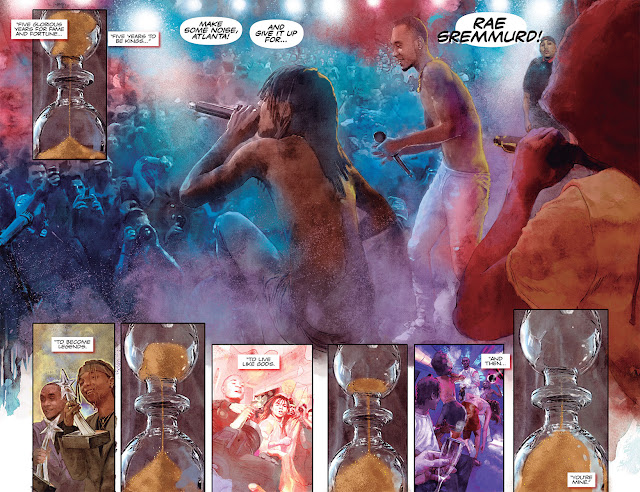