Review: PUNISHER: THE PLATOON from Marvel 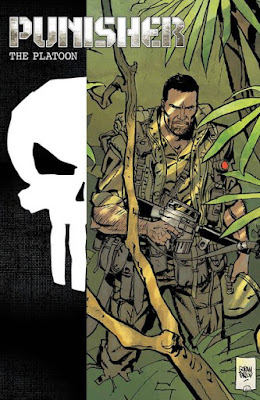 When I picked up this book, I was expecting more adult-themed and edgy content than the regular Marvel comic provides. I guess it was the MAX logo on the cover and the “explicit content” warning that set up my expectations. Considering that Garth Ennis, former scripter of some of the most violent and graphic Punisher stories ever told, was at the helm my presumptions seem justified. A book about Frank Castle’s time in the Vietnam war seemed alive with possibilities.

However, with one exception, Issue #1 could be an all-ages book.  There is no graphic violence (just a few panels showing an air strike aftermath), no sex, and no filthy language.  It is essentially a set-up issue, laying the groundwork for the story yet to be told. There are plenty of clues that it’s going to get very heavy, and very soon (perhaps next issue).

Ennis begins the story in present day, with a bit of a mystery. Writer Michael Goodwin seems to know a lot about both Frank Castle and The Punisher. We never see his face, his back is to the reader as he interviews four veterans.  They are all surviving members of 4th Platoon, Kilo Company, Third Battalion of the 26th Marine Regiment — when Frank Castle was a second lieutenant and just assigned to his first command in 1968.

Much to the amazement of the vets, Goodwin relates specific details of their first experience working under Frank Castle’s command. He’s interested in tracing Castle’s history between his war experience and his post-war emergence as The Punisher.  These events occurred before Castle’s second and third tours of duty and also before his family was gunned down in front of him by a crime family gang.

The marines are stationed on a large hill on the edge of the front lines, now down to 28 men and the last to get supplies.  Castle does his best to connect with his men and treats them like peers. No one is expected to stand at attention when he arrives or address him as “sir”.  He doesn’t wear his rank bars ( a smart move for several reasons) and actually goes out with the first patrol on a scouting mission.  There is an underlying current of tension as the opening round of the major Tet offensive is quickly approaching.

STORY:  Writer Garth Ennis is a war expert, and does thorough research.  The result is a story that seems real when detailing military strategy as well as the actions and reactions of soldiers, their concerns and fears. There is very little action in Issue #1 but the storyline is captivating and promises much more. Kudos to Ennis for giving some panel space to the enemy, and being empathetic to their concerns and fears as well.  2.5 POINTS

ART: There’s not a lot of opportunity for Goran Parlov to show what he’s capable of because of the amount of dialogue and head shots involved. However, his front line and jungle scenes look realistic, and his use of the wide-panel approach is wise. 2 POINTS.

COVER: The main cover makes its point without drama. You can tell it’s a war comic involving the man who will become The Punisher. 1 POINT.

READ AGAIN? Yes. There is so much detail you will need to read more than once to get all the points that Ennis wants to make in this set-up issue. 1 POINT.

RECOMMEND? Punisher fans and war comic enthusiasts should read this.     Super-hero fans won’t appreciate the lack of action.  This could be one of those books that does better in the trade paperback format.  1 POINT.

TOTAL RATING: 7.5 POINTS. Better than average and worth a look. 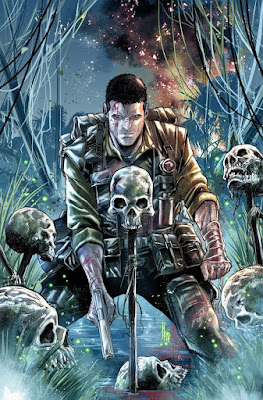