In a short forward to TALES FROM THE LAKE VOLUME 4, editor Ben Eads states his objective to present “harrowing” stories and feature “dim and cold worlds.” His selection hits the marks in almost every case.

Despite the large page count and  24 separate authors, there are no “filler” stories in this collection.  Every single tale is a quality read and worthy of inclusion.  Each story fits well within the horror genre, with only a few exceptions. Other than that, there is no designated theme, which helps to deliver a collection that is both diverse and fresh. 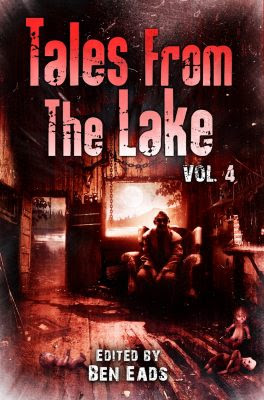 There are only a few shared themes, with four different stories of survival during the end of the world and three stories dealing with the death of family members.

Ten stories are told by the main character.  Usually, stories being told in the first person guarantee to readers that the narrator will survive.  That is not the case in two instances.  Another narrator experiences a monstrous transformation at the end. A fourth story concludes with a vague resolution that will leave readers wondering.

Nine of the 24 stories are exceptional, well above average and worthy of award consideration.  Previously published  “The Folding Man” by Joe R. Lansdale shares top honors with Damien Angelica Walters’ “Everything Hurts Until It Doesn’t” for best stories in this collection.

Lansdale tells a truly creepy story of a prank that turns nasty in a hurry.  Three friends in various stages of inebriation leave a Halloween party and go joy-riding on the back roads.  Jim thinks he’s mooning a car full of nuns.  It turns out to be “the old black car” of local legend.  The “nuns” have a secret weapon in the trunk - - a mechanical folding man enhanced by dark magic who takes after the friends in a gripping and disturbing midnight chase scene. It’s quirky and absurd but chilling nonetheless.

Walters’ story is a disturbing first person account of body horror, wherein two sisters continually cut each other to bleed the ugliness out. There are family differences that can’t be worked through and the story ends in shocking fashion following a betrayal.

The other most notable stories in TALES FROM THE LAKE VOLUME 4 are:

The short biographies in the back of the collection provide welcome introductions to the authors, most of whom reside within the United States. Twelve of them are either winners, finalists or nominees for Bram Stoker awards and other distinctions.

The other fifteen stories in the collection are fine reads and worthy of mentioning:

In “When The Dead Come Home” by Jennifer Loring a young couple lose their baby boy and move near the New Jersey Pine Barrens to start anew. Kate hears sounds and sees visions in the woods that recall her sorrow and lead to a dark decision.

“Go Warily After Dark” by Kealan Patrick Burke deals with world-shattering events, in this case the World War II bombing of Britain.

When a family seeks shelter in their dirt cellar, they learn that they may be sharing their residence with otherworldly tenants.

A depressed young man in Sheldon Higdon’s “Drowning In Sorrow” seeks relief from his anxieties at a familiar fishing hole and sees ghostly visions that help guide him forward.

“Whenever You Exhale, I Inhale” by Max Booth III deals with hate crimes as two young males in love discover they share a powerful connection in addition to their devotion to each other.

In “The Withering” by Bruce Golden a prisoner awaiting trial and confined to his wandering thoughts experiences a metamorphosis of sorts.

After his mother dies in “Grave Secrets” by JG Faherty, the son travels to his missing brother’s last known residence and attempts to re-trace his efforts to find a certain “nexus” in an odd village that was at different times a leper colony, a mental institution, haunted by cemetery ghosts, a place of vanishing families, and strange swamp lights.  There is a memorable line during his initial travels: “Even the buildings and cars seemed muted, as if God had put the entire town through too many wash cycles.”

A suicide hotline worker walking home during a bitter cold winter night encounters frozen figures along his path and becomes delayed and lost in “The Snowmen” by David Dunwoody.

The one story in the collection that seems out of place is “I Will Be The Reflection Until The End” by Michael Bailey, a first person recollection of backyard gardens planted with hidden seeds. The story hardly qualifies as horror, but straddles the line between fiction and fantasy. However, it’s well written and engaging.

In “The Honeymoon’s Over” by E. E. King a family pet has the misfortune of witnessing too many fatal accidents.

“Song In A Sundress” by Darren Speegle deals with childhood disappearances, ghostly advice, and retribution that is better late than never.

“Weighing In” by Cynthia Ward is appropriately one of the shortest stories in the collection and tackles the subject of Hollywood actresses obsessed with weight loss.

A drug burglar in “The Long Haul” by Leigh M Lane learns that his profession has wide reaching consequences. This is the other story in this anthology that barely skims the surface of horror, although the situation is horrific enough.

“Liminality” by Del Howison is a howling good western tale of a schoolmaster in a mining town tasked with negotiating peace with a strange indigenous commune.

“The Gardener” by Gene O’Neill is a clever and engaging crime story with a supernatural element that seems forced, as if the writer felt that he needed to justify classifying the story as horror rather than crime.

A mother and her blind daughter hide out in an upper floor apartment in Jeff Cercone’s “Condo By The Lake” as a alien jellyfish invasion explodes all around them.

An advance digital review copy of TALES FROM THE LAKE VOLUME 4 was provided by the publisher in exchange for an honest review.