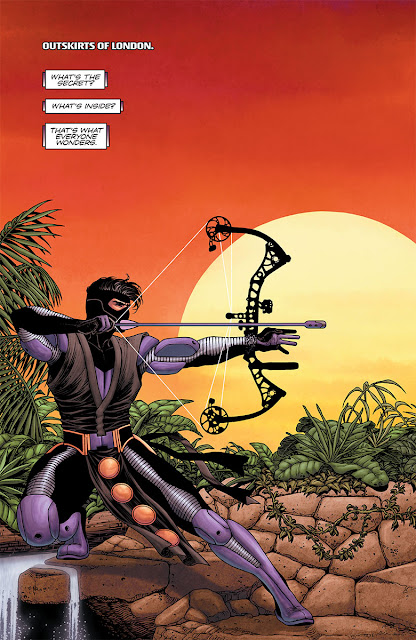 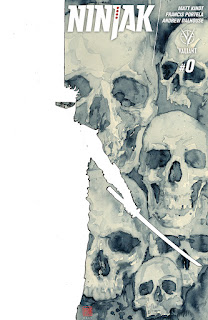 Ninjak #0 serves as a fitting conclusion to Matt Kindt’s legendary run on the title and sets the reader up for the new Ninja-K series by Christos Gage debuting on November 15.

Rather than devote the issue to a major summary of Ninjak’s history to date, the focus is on what makes him unique, particularly how he manages to survive the incredibly risky assignments he takes on. Kindt sums up Ninjak’s method quite succinctly. As a jumping on point for new readers, it’s not going to satisfy entirely, but will certainly provide a taste of the delectable flavor of the character.  I’ve been an on-and-off-again reader of Ninjak, and the #0 issue made me want to go back and read more of Kindt’s run.

The issue opens with a full page panel of Ninjak a.k.a. Colin King displaying his archery skills with beautiful colors by Andrew Dalhouse, who has done a remarkable job of making Portela’s dynamic art pop off the page.  As the story moves forward, every page is separated by a moving arrow in the center of the page - - symbolic of a journey across time. The panels at the top of each page tell a current story while the panels at the bottom of the page flashback through Colin King’s life.

In the top story, Ninjak enters an ancient church/temple in Oxford, England and encounters some deadly ninja monks in scenes that let the action tell the story without much in the way of text. And as an admirer of Portela’s action scenes, I”m grateful for that.  Then, the corridors lead to an office setting where Ninjak faces off against mask-wearing businessmen with guns, before he finally meets the object of his assignment and takes a suitcase of secrets away with finality.  Readers learn who he was retrieving the suitcase for in a final scene with a twist ending that is indicative of the character of Colin King.

The flashback story in the bottom panels begins with Colin’s decision and direction at the early age of nine, followed by his spy training in his twenties and carries through to present day. He’s experienced both true love and hard loss not once, but twice.

The prelude story is short, and begins with Ninjak infiltrating a heavily-fortified mansion in Gloucestershire, England. He confronts the resident, a person of power who apparently betrayed him. Ninjak wants to learn the secrets and hear the names, and utilizes his hardened interrogation skills. It’s a neat teaser for the new series, which may be taking a turn towards espionage more than before. Time will tell.  I’m looking forward to it, especially since Giorello’s art is just as exciting as Portela’s. 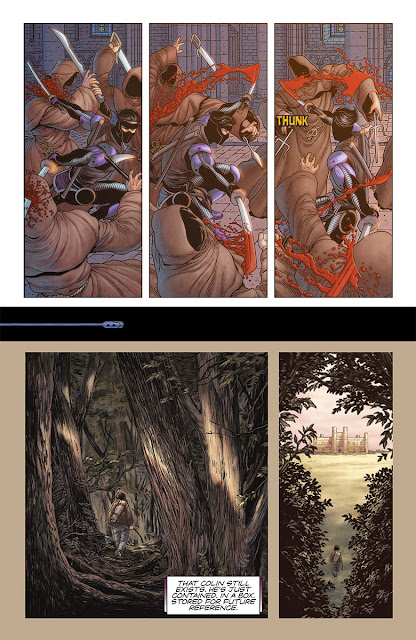 STORY:  As a transition between old and new series, it gets the job done. As a summary providing essential background for new readers, it may be a little confusing but it does reveal the essence of the character.  I believe the new series is going to feature more than one individual in the Ninja section reporting to MI-6 (Ninja-A, Ninja-B, C, etc) so it makes sense not to get readers immersed in just one single character.  I took a half-point off anyway for not following the traditional ways of #0 issues.  2.5 POINTS.

ART:   Amazing. If you just like good art, you can’t go wrong by picking up this book.  3 POINTS.

COVER:  A mixed bag. I’ve included my two favorite covers.  David Mack is a personal favorite, but his style is not for everyone’s liking. 1 POINT.

READ AGAIN? The way the story is set-up, this book is begging you to read more than once. Read the top and bottom stories separately for full appreciation, then read them together. In some places, the flashback panels lend additional meaning to the action panels above. 1 POINT.

RECOMMEND?  For sure. I suggest you pick up some Ninjak trade paperbacks by Kindt, and order your copy of the new series debut on November 15.  1 POINT.

TOTAL RATING: 8.5 POINTS. Much better than average, and worthy of reading. You won’t be bored. 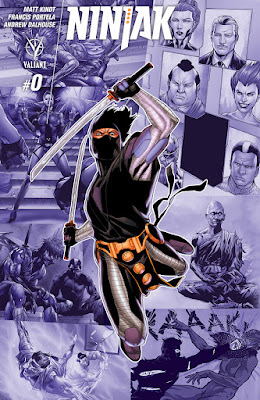