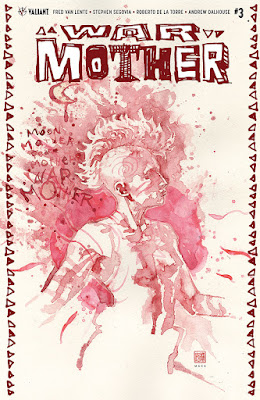 Background: Last year (in the 4001 A.D. limited series and one-shots) we were introduced to Ana a.k.a. War Mother, who served as chief warrior and resource collector for The Grove, a communal village established in the aftermath of the 4001 A.D. devastation. Ana is assisted in her endeavors by Flaco, a huge symbiotic sentient rifle that holds conversations with her and acts as unofficial advisor.

Issue #3 maintains the action-oriented pace of Issue #2, ramping up the fight scenes  even more. The difference is the inclusion of further developments in the more “human” relationships.  Ana’s sons learn the truth about their mother, and the relationship between Ana and her husband Ignacio. They get a glimpse of their father’s true feelings - which both disturbs and further prompts them to devise their own plans of revelation and revolution.

Meanwhile, Ana has her hands full attempting to escape from The Montana, no longer a safe and secure shelter for The Grove to relocate to.  Flaco, experiencing human feelings of non-appreciation and low priority decides to strike and stage a shoot-down.  While all this is going on, The Cleansed have been studying both Ana and her sentient rifle and have modified and adapted their “positronic” servants in new deadly forms.

It’s all leading up to a climax in Issue #4 as The Grove arrive at the complex at the worst possible time. 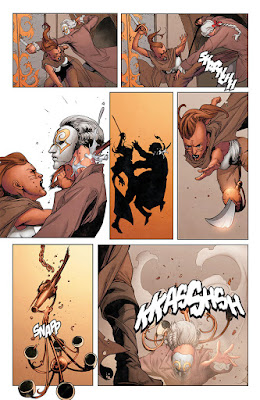 STORY:  There is a lot going on in addition to the summary of key points above. Don’t think you can absorb it all just by reading this review. We didn’t spoil any of the best parts. 2 POINTS.

ART:  Like the previous issue, in many scenes the illustrations tell the story without dialogue and captions to clutter up the panels. The fight scenes really stand out and shine, thanks to some great color work. 2.5 POINTS.

COVER:   Four choices, all good. Just don’t expect your local comic shop to have them all. 2 POINTS.

READ AGAIN?   I’ll wait for the story to wrap up and read it again in one sitting.  And I expect to enjoy it again. 1 POINT.

TOTAL RATING: 8.5 POINTS. Well above average, and worth picking up. 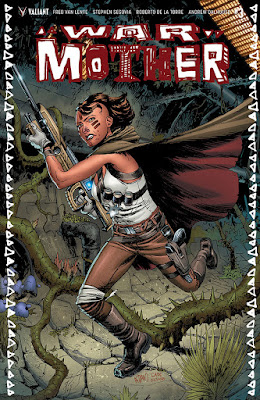