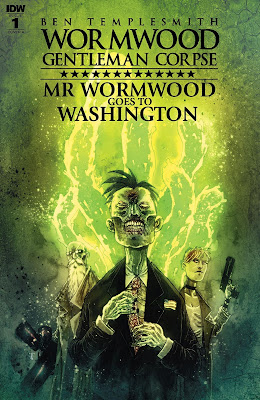 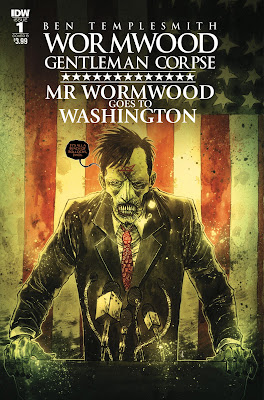 It’s been a long absence between appearances of what I consider Ben Templesmith’s greatest original creation: Wormwood, The Gentleman Corpse.  I’ve missed the comedic cosmic horror tales of this well-mannered but eccentric character.

Australian artist Templesmith made an impact with his illustrations in Steve Niles classic vampire tale — 30 DAYS OF NIGHT.  His eerie depictions ramped up Nile’s gritty story to another level entirely. With Wormwood he takes complete responsibility for both story and art— and it appears that he’s having a great time.

Wormwood is a parasitic demigod worm who possesses the ability to travel between dimensions.  He controls dead bodies by burrowing into the host’s head. He usually frequents the body of a well-dressed man, earning him the Gentleman Corpse title.

Issue #1 opens with a crooked Washington Congressman accepting donations from a sinister corporation with additional intentions and requirements in exchange for their support.   Cut to a strange cosmic rainforest where Wormwood’s regular companions find him riding a huge puss-dragon in order to collect slug milk, and generally living like a savage.

His associates, Mr. Pendulum and Phoebe Phoenix, have tracked him down in order to pass on a message from the United States government: both the CIA and The President want his services.  We’ll have to wait for Issue #2 to find out what the crisis involves, but it’s sure to be funny in a weird way.

STORY:  If you’re looking for a light-hearted story that combines horror with satiric humor, seek no further.  Issue #1 is essentially a set-up issue to introduce the cast of characters and reveal the conflict to come.  It makes a great beginning point for those who wish to get acquainted with Templesmith’s great creation.   2.5 POINTS

ART: Templesmith’s quirky art takes some getting used to. But, once you become familiar with his illustrative style you’ll begin to see how well he integrates all the elements together in a giant wash of color and pencils.  If you could combine the styles of Ralph Steadman and David Mack, you’d end up with Ben Templesmith art.  2.5 POINTS.

COVER: There are some great covers here, all done by Templesmith. Cover B is my favorite — a zombified politician at a podium and for once, speaking the truth. The Convention exclusive cover is a nice profile of an emaciated Trump corpse smoking a thin Virginia Slims type cigarette. 2 POINT.

READ AGAIN? The best way to appreciate this is to read the issue once to absorb the story. Then, read it again to see how the art enhances the proceedings. It takes several views to catch everything.  1 POINT.

RECOMMEND? Not for everyone. Fans of dark humor should pick this up.  One-Half POINT. 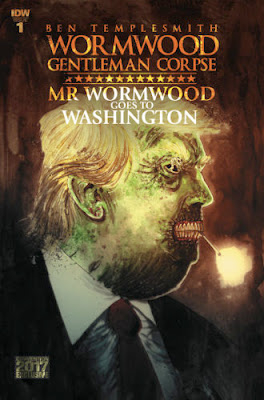