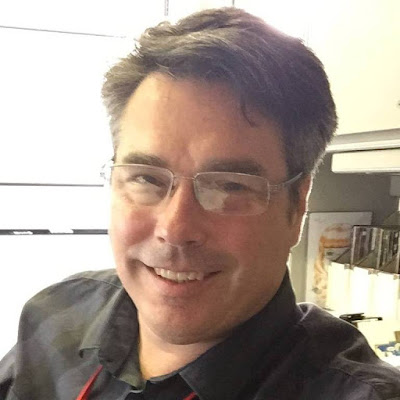 EDITOR’S NOTE: Aftershock Comics publisher and chief creative officer Joe Pruett will make a guest appearance at Captain Blue Hen Comics in Newark, DE this Friday 11/03. He’ll be signing copies of his own BLACK EYED KIDS (B.E.K.) comic and Aftershock books as well as meeting and talking with fans and interested customers. If you’re on the fence about whether or not you want to attend, read below to learn more information about Joe Pruett . . . . . . . . . .

Joe Pruett, 51, is a graduate of the University of Georgia and a veteran of the comic book industry.  He’s previously worked as an inker, letterer, writer, editor, and publisher at various companies. His most recent work is at Aftershock Comics where he serves as publisher and C.C.O. as well as writer of the popular horror series, BLACK-EYED KIDS.

Tracing Pruett’s career path in the comics industry is like taking a tour of indie comics publishers of the late 80’s and early ’90’s.  Pruett was hired in 1989 as an assistant to Bob Burden on FLAMING CARROT COMICS, providing inking and lettering assistance on Issues #23-29.

In 1992 he joined Caliber Comics as writer, editor and creative director, most notably as developer and writer for the NEGATIVE BURN anthology series, which received several Harvey and Eisner Award nominations. His “Kilroy Is Here” stories in NEGATIVE BURN represent his best work at Caliber.

In 2004, Pruett formed Desperado Publishing and brought back the second version of NEGATIVE BURN among other works.  In 2007, Pruett won the Eisner Award for Best Comics Related Book with THE ART OF BRIAN BOLLAND.   Desperado had a publishing partnership with Image and IDW.

His creative partner at Aftershock Comics is editor-in-chief Mike Marts, another comics industry veteran.  In an early Washington Post interview, Marts spoke of a new wave of creativity in the comics world and this being the right time for a new company to focus on that.  He told the Post reviewer “more and more, we’re discovering that the comic-book reading audience is gravitating more towards specific creators and less to specific characters or properties.”

Per Pruett, Aftershock’s aim is to “establish itself as a reliable brand for well-crafted tales by innovative creators.” 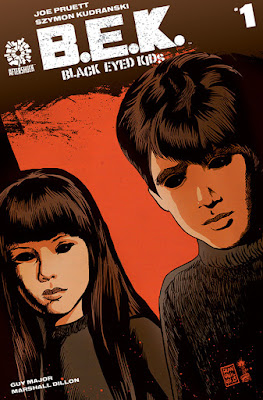 The title Pruett writes for Aftershock is BLACK-EYED KIDS, about a mysterious band of cloaked children with solid black eyes who follow an unknown leader of sinister purpose. It’s creepy, gruesome and frightening as well as based on a current urban myth of modern folklore.  BLACK-EYED KIDS debuted in April 2016, an ongoing monthly with two trade paperback collections so far.