They Said It Better: Race, Gender and The Green Hornet 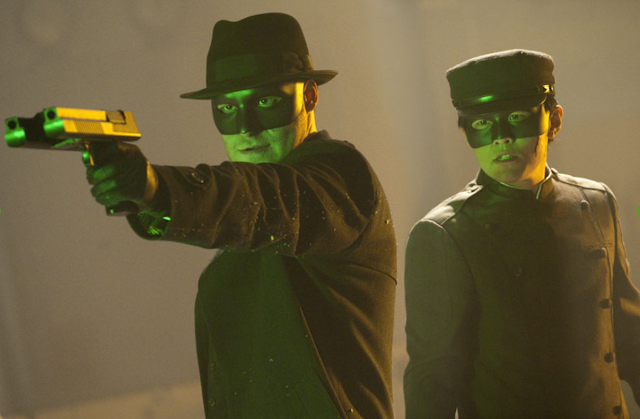 I've seen Seth Rogen's "Green Hornet", which I enjoyed, but this is one of those cases where I came across a better review before I had a chance to write mine. So, I'll just share a few thoughts and then give you the link.

This is a comedy action-adventure, and it stays really close to the line between being too silly and too serious. I think it works because Seth Rogen is the only character trying to be funny, and even that is in character for rich playboy layabout Britt Reid. Jay Chou is terrific as Kato, the brains (and muscle) of the operation, both in and out of costume. My one complaint is that I would have liked to see more martial arts action scenes with him. (But that was my complaint about Bruce Lee in the 60's TV series too, so at least I'm consistent.) Cameron Diaz doesn't have a ton to do as Britt Reid's assistant Lenore, but what she does is great and non-stereotypical for this kind of film. (See below for more about that.)

I liked that, at the same time Reid is slowly becoming more competent the mobster bad guy slowly gets driven crazier by the Green Hornet's interference. Despite being a comedy, the film is respectful of the concept and there are lots of in-jokes that fans of previous adaptations (especially the TV show) will appreciate. That said, I think it should work equally well for the majority of the audience who've never heard of the character before. The action scenes are well done, and while the Hornet and Kato are more cavalier towards taking lives than I would prefer I think it's consistent with what modern audiences expect. (Like "Batman Begins", we'll just assume that all the cops that got run off the road by the hero's cool car were uninjured.)

There's actually a more subtle (almost daring) film going on here, and for an better analysis of that than I could do I highly recommend reading "Race, Gender, and The Green Hornet" at Fantastic Fangirls. I know it sounds pretentious, but it's a really thoughtful, well-written review. (Peter David's review is also pretty good.)

I did not see this in 3D -- I avoid that because I never know what to do with my glasses -- so I can't comment on those effects at all. Also, a program note: SyFy is running another marathon of the 60's "Green Hornet" TV show all day tomorrow (1/28). If you've never seen Bruce Lee in it, then I recommend catching an episode or two just for him but otherwise it's basically just 60's "Batman" played completely seriously. (i.e. boring.)