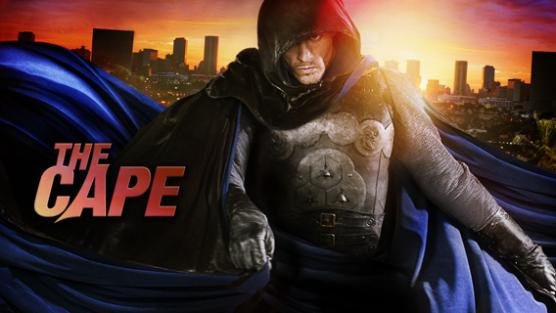 So, "The Cape". Pretty much the most generic superhero name possible, and a premise to match. Did it manage to rise above? Not really. But I kind of loved the first hour anyway, where everyone plays their parts just the tiniest bit over the top. Not enough to be ridiculous; the performances come off sincere instead of cynical just enough to add a little bit of wit and charm to the proceedings. Fictional "Palm City" is unreal and abstract enough to sustain the idea that the city leaders are considering letting the Ark corporation, secretly run by supervillian Chess (of course), privatize the police department. I like that the first hour doesn't waste a lot of time getting our hero, Vince Faraday, framed for Chess' crimes and off the grid training with the Carnival of Crime (!) to establish his new identity as the hero of his son's favorite comic. Lead actor David Lyons is earnest, if a bit bland, and needs to take American accent lessons from Hugh Laurie or Simon Baker. The Cape stops one of Chess' plans, as well as some petty crimes -- Shopkeeper: "You're a superhero! What do they call you?" Cape: "I'm the Cape." Shopkeeper: "Well." (pauses, then enthusiastically) "You'll work on it!" -- before visiting his son (in character) to tell him to never give up hope. (This is arguably pretty selfish, as the kid spends his every scene in the second half of the show pining for another visit.)

But the second hour, about Chess plotting the murder of a politician ("West Wing"'s Richard Schiff) who dares vote against his takeover plans, is relentlessly grim, drab and awful. I do like that after a stabbing attempt fails Chess invites Schiff to a fancy restaurant to poison him instead, but that's the only bit of whimsy in an hour of secret assassin conspiracies, an incomprehensible French assassin, cliche dialogue ("My family's not my weakness. They're my strength.") and Bruce Wayne-like training where Faraday tries to immunize himself to poisons one drop at a time. We'll see next Monday which show this turns out to be: I might just watch the one with the slight charm, even though it's not very good, because the people that made that hour seemed to be having fun. I'd definitely pass on the grim 'n' gritty version because that feels like the show the network wants, not the show the creators want to make.

I can't quite in good conscience recommend the show yet, but if you're interested you can watch the pilot online at NBC.com's "The Cape" page until the first week in February.