I thought the premise for this book was interesting.  However, after reading the first two issues I like this book (but don’t love it)  and don’t consider it essential in the same way that I regard the Bendis, Brubaker, and Diggle DAREDEVIL books.   I don’t recall encountering the work of David Liss before, so I’m willing to give him a little time to develop this title.  I’ll keep my eye on it,  but it’s not going on the pull list. 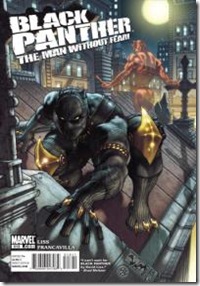 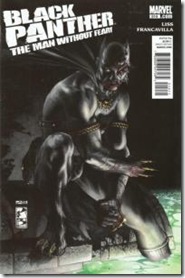 What Liss seems best at scripting is the one-on-one encounter  and there are numerous examples of that in the first issue:  - - Matt Murdock confiding in T’Challa and asking him to take over protection of the Hell’s Kitchen neighborhood  - - - and T’Challa welcoming a new start and a chance at redemption and confidence restoration - - - T’’Challa talking about his absence with wife Storm - - in his new identity of Mr. Okonkwo interviewing a former Serbian nationalist for a waitress job at his diner - - turning down Luke Cage’s offer of assistance.  What these little scenes/encounters share in common is a realism that seems heartfelt and touching.

Liss also knows how to move the story along, as a new villain “Vlad The Impaler” wants to take over as local crime lord.  My only gripe is the way he depicts this immigrant Romanian with a super-past and super-secret.  In the interest of authenticity he uses  the broken English speech and mannerisms of Euro-gypsies for this character and it becomes annoying after awhile.   (My patience, it is wearing, yes?  But is important to portray properly, no?)   Also not entirely satisfying is the art by Francavilla.  Granted, there is a lot of story to get across here - - so the panels are smaller and don’t lend themselves to really fleshing out some battle scenes.  But does the Panther have to lead with his feet in every fight scene?   The pace picks up and the art improves somewhat in Issue #514.  I also expect this book to improve as it moves along until the inevitable return of Daredevil.   Enjoy it while you can.

P.S. The covers by Simone Bianchi & Simone Peruzzi are outstanding.