A Story I Wish Everyone Would Read: PHOENIX WITHOUT ASHES

HARLAN ELLISON’S PHOENIX WITHOUT ASHES #1 – 4 (IDW 2010)  Written by Harlan Ellison, Art by Alan Robinson, Colors by Kote Carvajal, Letters by Robbie Robbins.      (NOTE: IDW on December 16, 2010 announced plans for a hardcover edition of the graphic novel with a release date yet to be determined.) 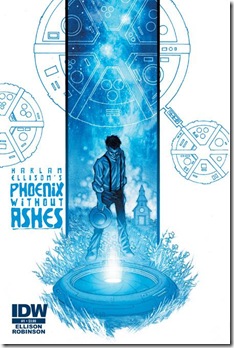 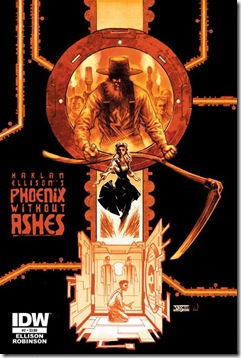 I wish I could meet someone as they explore science fiction literature for the first time, someone looking for a few recommended works, or a list of ten or more short stories and novels to begin their readings with. PHOENIX WITHOUT ASHES would be right among the top choices on my list of best science fiction works of all time  - - - it’s a great example of the power of imagination as well as the ability of the genre to stimulate thought and shape opinions on socially important issues.

The four issue mini-series is a perfect format to adapt this great work to comics.  Having the original author, Harlan Ellison, write the script for re-introducing the story is an absolutely divine bonus.   Artist Alan Robinson does a marvelous job of visualization of this incredible world and his awesome panels are exciting to behold  and savor slowly.

PHOENIX WITHOUT ASHES has a troubled history.  It began as the script for a 1972 teleplay, a two-hour pilot for a proposed television series.  Inept producers took over and re-worked it, butchering Ellison’s script and leaving little of the original work intact.  Ellison tried to disassociate himself from the show, which became Canadian series THE STARLOST.  It was later published as a paperback novel, with Edward Bryant assisting in adaptation.  That paperback was my first exposure to the story, and it made a big impression on me in more ways than one. 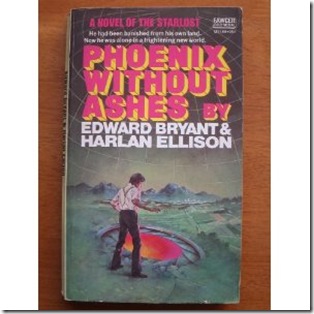 The first girl that I dated on a regular basis (her name undisclosed to protect the innocent)  and started to develop feelings for was the daughter of  Bible-toting fundamentalists from the South who moved their family to Pennsylvania.  They were unhappy that she was dating me because I was not a member of their Church and they were concerned that I might bring unwelcome ideas/concepts into her mind.  (I leave the rest to your imagination.)  There were strict rules laid down for our dates that I had to adhere to.  However,  the ugly older boy next door was encouraged to date her (by her own parents!) and could stay out very late simply because he was a member of the same Church (and “the right stuff.”)  Her plan was to get me to convert to her religion and be “saved.”  I relented and attended an evening service with her and her family and was scared for my freedom of choice by what I witnessed.  I ended up breaking away from that relationship shortly after.   When I read PHOENIX WITHOUT ASHES some years later it really hit home (like right between my eyes!) and brought all those memories back.

Ellison’s story takes place in the 28th Century and tells of Devon, a young farmer with a restless nature and unappreciated ideas living in a very small, isolated religious community similar to the Amish lifestyle.  He loves a neighbor’s daughter, who is betrothed to another male who really doesn’t care for her but is willing to follow the elder’s wishes.  Devon gets outcast from the community when he challenges some of the ruling elders’ principles. During his exile he discovers the true nature of the world he lives in and attempts to return and save everyone, in spite of the threat of persecution.   That doesn’t sound very much like a description of a science-fiction story, but I’ 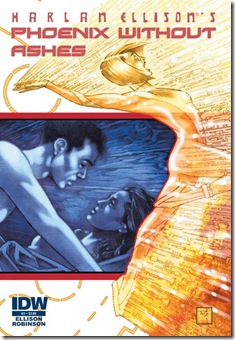 m trying not to spoil it for you if you aren’t already familiar with this work.

It’s been too long since I read PHOENIX WITHOUT ASHES so I can’t tell if the ending has been altered for this comics adaptation.  I really like how the min-series ends, but don’t recall if it concluded exactly the same way in the novel. 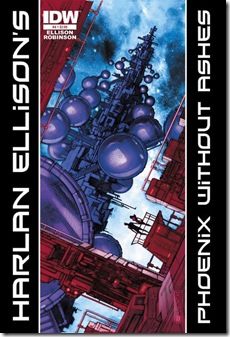 PHOENIX WITHOUT ASHES belongs on my “keeper” shelf right alongside the copies of DO ANDROIDS DREAM OF ELECTRIC SHEEP? (Boom! Studios).  Both stand as fine examples of the power of the comics medium to adapt ground-breaking science fiction works and introduce them to a new audience.