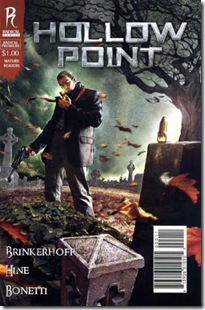 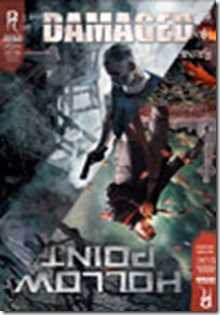 The credits page synopsis does more to cover what HOLLOW POINT will be about than the 12 page preview does:  “After surviving a near fatal gunshot wound to the head, a notorious assassin realizes that the bullet meant to kill him has opened up a third eye into the spirit realm.  Tortured by his own blood-soaked legacy, he is given a rare chance at redemption by avenging the ghosts of victims past, with the dead as his new employer . . . “

What the preview does instead, and does very effectively, is present part of the prequel to this transformation, revealing some of the introspection that made the assassin (never identified by name yet) take pity and hesitate to complete the kill on his present assignment, perhaps being   his last mission  - - after which he resolved to ask questions that ended in his change of direction.

I really enjoyed the set-up in these 12 pages.  The target of the assassin is an alleged pedophile priest now transferred by the Church to a Mexico parish in order to avoid scandal.  He trails him to a bar where the priest is drinking alone. Something compels the assassin to join him and the dialogue/interplay between the two is both interesting and makes the difference between just a standard crime comic and one worth investigating further.   The art by Bonetti can’t be too flashy or oversized, as it takes a lot of panels to present this story - - but I do see a lot of detail in the backgrounds that move it beyond the standard fare.

The release date of HOLLOW POINT #1 is not noted here, so I’ll have to check PREVIEWS.

Like HOLLOW POINT, the short preview of DAMAGED is meant to generate some interest and set the stage for the bigger story to come.  It’s very atmospheric and reads like a standard police procedural - - because essentially that’s what this preview is.

Captain Lincoln is a veteran police officer, called into the initial crime scene investigation of the bloody aftermath of a murder raid on a Russian Mafiya stronghold/safe house.   It appears to be the work of an assault squad but Lincoln sees evidence that reminds him of a similar incident in his past and becomes suspicious.  After locating and questioning the sole survivor he realizes his worst fears - - it may be the work of a one-man rogue/maniac cop.

Also like HOLLOW POINT, it the story that is going to drive this book and make it worthwhile.  The art is good and compliments the story in setting the mood, but doesn’t leave any other impression on me.  However, I’m looking forward to more of this story under the capable hands of a grim writer like Lapham.

Unlike HOLLOW POINT, there is no synopsis on the contents page to indicate where this story is heading.  However, after reading the description on Radical Comics website, it gets even more interesting and DAMAGED probably would attract more attention if it had been.   So, I’m going to use it here in it’s entirety:

Created by Full Clip Productions’ John Schwarz and Michael Schwarz, and written by Eisner Award winner David Lapham (Stray Bullets), a tale of two brothers committed to justice in different ways – one inside the law, one violently beyond it.  Now, with the end of their careers approaching, they must train their replacements, hoping to remake each in their image.  But the vigilante code has changed and the brothers are left unprepared for the true lawlessness and corruption that is about to be unleashed.