I did comment earlier (see the archives for the December 20, 2010 blog)  that I would later be exploring Grant Morrison’s run on BATMAN in order to decide for myself  which of two viewpoints is correct.  There is a debate in circulation among comics circles about THE RETURN OF BRUCE WAYNE mini-series:  is Grant goofing on the audience or is Grant producing a great work?

To some of you my choice of commentary  - - BATWOMAN , a book not being written by Morrison - - may seem like a classic case of  misdirection.  There’s a reason I’m talking about it now.  I believe I’ve found a connection in a Morrison-scripted book which I’ll write about later. In the meantime this looks to be a beautiful book that I hope has a long run. 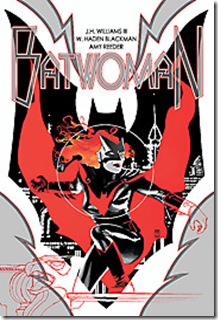 The script is a great re-cap of previous events and Batwoman background that doesn’t bore or make you feel like reading history while it’s going on.  (Marvel Saga books, take a hint!)

A  Batman (makes you wonder which one initially, but by page 3 you know it’s Bruce Wayne) is quietly observing the comings and goings of Batwoman and Kate Kane.  The purpose of the surveillance is to determine if indeed Kane is Batwoman as well as assess her combat skills in action.

Most of the story plays out across double-page spreads with Batwoman in the top panels and Kate Kane in the lower panels, or diagonally divided.  The Batwoman art is by J H Williams II - - as creative as  ever.  I love how he uses rich red and black colors to accentuate the movements of Batwoman.  The Kate sequences are drawn by Amy Reeder in  a very complimentary style that fits well with Williams’ work.   You need to see these panels.  Batwoman #0 is a study in stylistic expression.  Outstanding work.

Batman Wayne concludes that Kate is Batwoman, and “she has all the right instincts.” . . . “More important, she has the one thing I can’t teach.  That hole inside her that can’t ever be filled, no matter how many criminals she takes down . . . it givers her the drive to do this.” . . . “It’s time she and I have a serious discussion about the future.”

Right after being “wowed’ by the work of J H Williams III in BATWOMAN #0 I pick up this book and get stunned a second time  by the always amazing panels by artist David Finch.  That is reason enough right there to pick up this book.  However, the story by Morrison helps set up what is going to be happening in all  the other Bat-titles in the months to come. Bruce Wayne has returned and calls a gathering to the Bat Cave to discuss his future plans.  Among the group are Batman and Robin (aka Dick and Damien), Red Robin , Batgirl and Oracle.  Bruce wants to take the Batman mission beyond Gotham City and make it a world-wide crusade.  He can’t do it without lots of help.   (There’s a lot of soul-searching and analysis that must have gone into those decisions, but Morrison saves the background for another day and concentrates solely on giving a little preview of the new game-plan.  There’s also glimpses of a new international villain, a combination of highly-financed terrorist and creepy mad geneticist that should be interesting.)

After reading BATWOMAN #0 ,  I was convinced that she would be part of this initial gathering but she’s noticeably absent from this issue.  Maybe Bruce had a change of heart about her readiness, or perhaps has bigger plans in mind and/or a solo mission for Kate Kane.

BATMAN: THE RETURN is so much more than just a supplementary annual.  If you want to follow the events to come you should have it. I consider it essential.