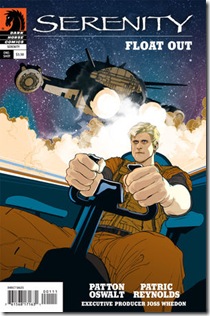 Josh Whedon’s late lamented television series FIREFLY was a particular favorite of mine.  So it’s nice to learn that Dark Horse has been publishing some stories based on the series under the banner of SERENITY (also the title of the movie that served as the final episode of the show).   Somehow I missed the earlier issues of SERENITY  and the first trade paperback.  But now it’s in my radar and I also plan to check out the upcoming graphic novel featuring the character Shepherd.

Comedian and film/television actor Patton Oswalt does a credible job with this story, as three former associates of Wash ( Washburne - -  the former pilot of the Firefly, who dies in the Serenity film) reminisce and share tales of his exploits,  usually involving quick get-aways and narrow near-misses.   The three short stories are amusing and the art by Reynolds is expressive when it needs to be and creative in the space scenes.  It reminds of the quality of work often seen in earlier issues of STAR WARS: X-WING ROGUE SQUADRON, also from Dark Horse.  While quite good, there’s nothing special here unless you are a fan of FIREFLY and want more of it. 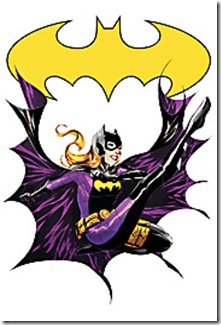 I was very impressed with the early issues of Batgirl when this series debuted.  I decided to re-visit it again and wasn’t disappointed.  I haven’t been this entertained by a single-issue story in some time.  It’s  a stand-alone story and a great place to jump on and/or re-visit this title.

The art by Perez is very crisp and fluid.  The colors throughout this issue are vivid and enhance the story-telling.  And I absolutely love this story!  Batgirl gets working on her first mission through Batman, Inc. and finds Robin (Damien) there ahead of her stealing her thunder.  After some delightful back and forth banter they decide to reluctantly work together investigating a gang of kidnappers who prey on school children.  Lots of fun ensues.  I may have to come back.

I’ve written about this mini-series previously, and Issue #3 doesn’t let up one bit.  It rewards the reader for their purchase and efforts. 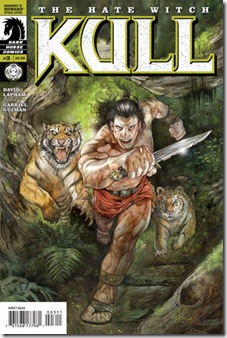 I’ve also admired Lapham’s work and come to respect him as a highly adept chronicler of the seamy underbelly of current society.  This series confirms for me that he’s much more than just a one-trick pony and can work seamlessly in various genres.  Here, the same skill which he has used to portray the barbarism of modern civilization serves him well in a fantasy version.  It just seems tamer because we expect a little blood and gore when reading about Conan, Kull, etc.

I’m not familiar enough with  Howard’s stories of Kull to identify if some of this story is a re-telling of the legend / beginnings of Kull or a completely original creation of Lapham’s  - -but it’s a nice tie-in to the previously-mentioned  connection between Kull and the Witch.

The art here is very good, and the inks and colors just explodes with richness.  It’s worth seeking out the single issues because the covers by Tom Fleming are so good.