While not as horrific in its imagery as Issue #1, this books continues to disturb with its unsettling tale of a world unraveling for struggling real estate agent and distraught husband/father Richard Ashwalt.

The skeletal and creepy Jebediah Crone who wanted to purchase the home where a recent massacre was committed won’t abandon his mission, even worming his way into Ashwalt’s home via a ruse and ingratiating himself to his young daughter.   The real estate agency over-rules Richard’s objections and sells the home to Crone.   Richard enlists the help of Patrick, another realtor, to investigate Crone and finds he has a history of buying properties where murder/suicides have occurred. 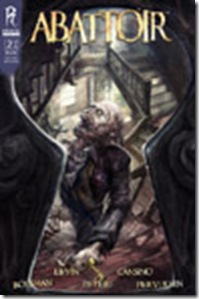 What keeps this book interesting is that there is a multi-layered complex mystery behind these creepy 1980’s  events that is slowly unraveling and revealing more as the story progresses.  Richard continues to be disturbed by horrible dreams involving his father showing him murder scenes - - while in the real world a police investigation of the actual event finds evidence that points back to him.

I’ve previously written about detecting a cinematic-like approach to all the Radical books as well as similar painted-appearing artwork and coloring/ink styles.  After reading the NY Times profile on Radical (see yesterday’s article in the BC archives) it all becomes clearer.  These books are actually proposed movie scripts.   Unlike the “movies research and then find a suitable comics property” approach, this is more like “using comics to develop movie properties.”  It’s a clever business model - - when presenting the idea to Hollywood producers there is already storyboards in place and a well-defined first draft of a script - - and perhaps an already built-in audience for the movie based on how popular the comic book was.

Maybe some comics purists object to this approach, but you’ve got to admire it a  little.  As long as the books are produced this well and  entertaining  I certainly don’t mind at all.

UPDATE TO JAN 11 ARTICLE ON RADICAL:  I’ve since learned that two more Radical Comics are scheduled to be filmed = EARP: SAINTS FOR SINNERS  (Dreamworks)  and  FREEDOM FORMULA (New Regency).

Issue #1 ended as imaginative would-be science fiction writer Benjamin Warner’s reality began to unravel and elements from his fictional work began to manifest and intrude into his life in the real world.   Issue #2 finds him mostly reacting in amazement to event after event as the lines between reality and fiction become sewn together. 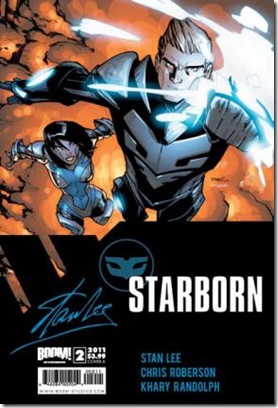 The “Civilization”  written about in Warner’s works actually exists and is a group of various alien races from different planets banded together to ward off the invasion attempts of the Hybrids.  One of the Civilization races, the Hive (who look a little bit like a Skrull/Brood combination) , have detected an heir to the House of Bin (apparently high-ranking on their world)  living “on a planet entirely inhabited by humans”.  This news causes some disgust among the membership.  Apparently “humans’ have been a troublesome member of “Civilization”.  Obviously they are speaking of Ben Warner, which means he may not be really human, but a Hive member.

There is a very amusing segue in the beginning of this issue after the Civilization meeting concludes with a mention of  a limb falling from a tree and the story cuts away to the action back on Earth as Ben and his rescuer, Tara Takamoto, take a giant leap off a building as they flee the Hive agents.   Seems that Tara, Ben’s childhood sweetheart and neighbor, has always been there from Day One to serve as his protector.  She’s a shape-shifting martial arts and weapons expert and may be much older than she appears.

To make matters worse, the agents of The Network (combined Civilization forces) have just arrived as this issue ends.  The art by Randolph is manga-influenced but more subdued than others who opt for this style.  It seems more lean and angular to me and it’s very entertaining, as is this book.  I think this is the most light-hearted and amusing so far of the Stan Lee titles at Boom!