Radical Comics, a new company just two years old, is continuing to grow - - with renewed emphasis on developing movie properties as well as branching out into China/Asia.  The movie direction explains in part to me why they have been associated with so many screen-writers, directors and actors in their various books (their emphasis is on limited series rather than regular monthly titles).   They’ve apparently taken  a little heat for that movie connection from critics, but as long as the quality of the work is good it shouldn’t matter.  I’ve been largely impressed by most everything I’ve picked up from Radical.  I’d also be likely to see the film adaptations of at least 3 of the 5 announced movie properties in development. 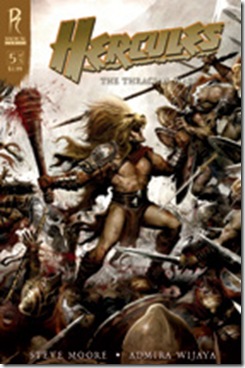 You can read a short profile on the company plus an update on current activities right from the front section of the New York Times business section right here:

Radical as a company reminds me a lot of the late  lamented Crossgen Comics  - - - a company that seemed to grow and expand into other markets too quickly and imploded due to various strains on their business model.   (Rumor was they weren’t paying writers/artists on schedule either).  The profile of owner/founder Barry Levine reminds me also of Crossgen’s founder - - lots of ambition and drive.  I wish them well and hope they are financially strong enough to handle this kind of growth.

Here are the properties supposedly in film development:  “Hercules: The Thracian Wars”; “Driver For The Dead”, “Mata Hari”, “Oblivion” and “Damaged”.