Sleeper title of the year? SUPERBOY continues to delight!

One of the reasons I like Jeff Lemire’s run on SUPERBOY so far is that he incorporates small town sensibilities and atmosphere into a book about an all-powerful super hero.  Also, he’s writing about the Conner Kent version of Superboy, and not young Clark Kent.  Connor has issues related to his origins as a Superman/Lex Luthor DNA clone and his proper role in the universe.  He retreated to the more laid back life in Smallville and the advise and counsel of Ma Kent - -  but life is far from simple.  It seems like the world is bringing its problems right to Connor, and he feels responsible for what’s happening in Smallville as a result. 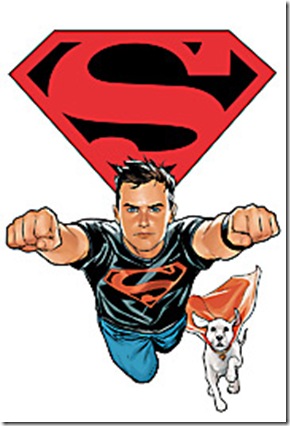 The town of Smallville has certainly taken it’s licks.  In Issue #1 the Parasite left a trail of devastation behind him as he maneuvered through the fields and countryside.  Old Mister Gilliam’s machine did even more damage in Issue #2, leaving an overgrowth of giant vines behind.  In a lot of books, this would just be handled in passing in the following issues, or not mentioned at all as if the town cleaned up overnight.  But in Superboy #3 you still see signs of this destruction in every outdoor scene.  Lemire does his best to keep it real in an unreal setting, and that’s what I like - - this conscientious version of Superboy.

The opening is pure dynamite, and pure Lemire.  A beautifully detailed scene of  early morning as the dusky sun outlines the moon before it disappears from the sky, crows depart from weathervanes and Krypto howls.  Conner and Ma Kent have an early morning discussion.  He feels the farmers will have a hard time recovering as Ma assures him the townsfolk are sturdy and resilient.  He later tries to set up his own Farm-Aid type relief by organizing a Superboy/Kid Flash race as a fund-raiser.   (A preview of an upcoming story to whet the appetite.)

More great scenes occur as Superboy has a heartfelt discussion with his new sidekick  about why Connor and Simon can’t be seen hanging together at school.  This takes place in one of the few places in a school where you can get away from a crowd  - - the boy’s rest room.  Lemire just thinks everything through and chooses the natural direction.  Oh yeah, there is plenty of action and mystery this issue also.  A headache plague emerges that renders unconsciousness just before Psionic Boy makes his appearance from the future followed by pursuers.  Get this!