Lapham lurks here: Some barbaric fare - - - I sure don’t hate this! 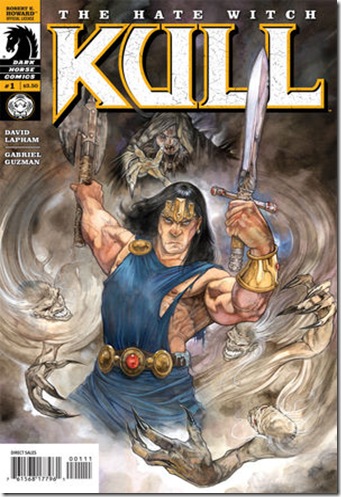 When I’m in the mood for reading some rollicking adventure story, just pure 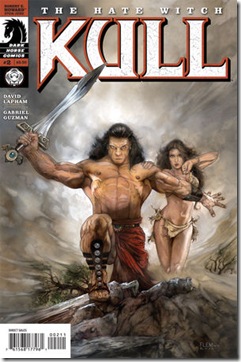 action/adrenaline, I can usually count on a CONAN or RED SONYA book to take care of my cravings.  So when I saw that the highly versatile (and dark) writer David Lapham would be scripting a Kull mini-series for Dark Horse  I knew I had to read it.

KULL THE HATE WITCH doesn’t disappoint.  It’s my absolute favorite sword and sorcery book at the present moment.  Anybody who is familiar with the work of David Lapham might think that a barbarian setting is just the place to put his horrific and gory inclinations into play.   As I normally approach his stories with delighted but grisly apprehension - - I have to say that this is pretty tame stuff compared to his usual standards.   Or, it could just mean that he fits right into this type of genre.  Actually, this is so good and seems so true to the pulp canon that Lapham could actually be considered a Howard scholar.  Blink your eyes, and you could easily think you were reading a Roy Thomas, Kurt Busiek, or Tim Truman tale.

Just when I get lulled into thinking I’m no longer reading a Lapham-scripted book some of his familiar fingerprints show up, such as dwelling on the aftermath of battle/fights/action.  As the Hate Witch makes her escape from the court-room of King Kull, her attack crows don’t just distract the Red Slayers of Kull - - they pluck an eye right out of a soldier’s head.   When the wraith-like demons that serve her descend like a plague upon the town, they dramatically rip the hearts right out of the populace.

Before I get wrapped up in the story and forget to mention it - - the art team on this book is outstanding.  The inks and colors are so vivid you might think the pages are wet.  It’s really detailed, breath-taking and visually aids the reader in becoming immersed in this fantasy world. 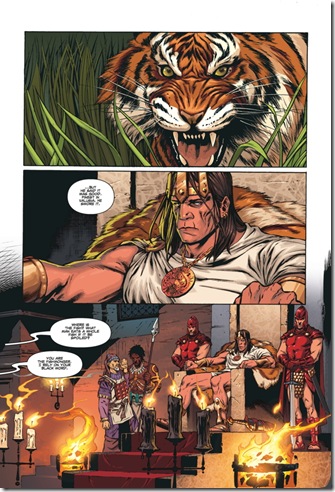 A very frightening old hag, the Hate Witch, comes to the court of King Kull prophesying doom for Valusia  and mankind and blaming Kull as the cause, inciting rebellion against the rebel king even as she terrorizes the townsfolk to help reinforce her dark plans. Kull manages to chase her away but realizes the respite is not going to last and he needs to track her down and end it.

The basic storyline is more than enough to hold your attention. Yet, Lapham adds in several interesting sub-plots that would serve as good storylines all on their own.  One revolves around some political intrigue as some outlying territorial monarchs are unhappy with the court arrangement in Valusia and want to usurp some of that power.  A visiting dignitary even contemplates sacrificing the life of his lovely daughter as a martyr simply for his own political gain and to cast disfavor on Kull - -  yeah, he’s the type of merciless and heartless villains that populate so many of Lapham’s works.

In addition, there’s a connection between Kull and the Hate Witch when she put her “mark” on him during his younger days on Atlantis.   There are also past events related to Kull’s exile from Atlantis that crop up once again as he returns to his native land in pursuit of the Hate Witch.

That’s just in the first two issues.  This is good stuff indeed.