GREEN HORNET: plenty to buzz about

The amount of Green Hornet material currently available through Dynamite Entertainment is staggering - - they might as well put the “franchise” tag on him - - I think there are more Green Hornet titles and spin-offs than there are books featuring Spider-Man at Marvel.

All those books look interesting, but there are way more than I have the time,  inclination, and/or budget to consider picking up.  I’ve been sticking with GREEN HORNET solely, the flagship title, and I haven’t regretted that for a moment.

Now that the adaptation of the first rejected Green Hornet film script by Kevin Smith has played itself out in the first ten issues of GREEN HORNET, the writing reins are turned over solely to Phil Hester and I couldn’t be happier.  He does a great job with this title, making it modern/current without forgetting the heritage/past and frequently paying tribute to it. 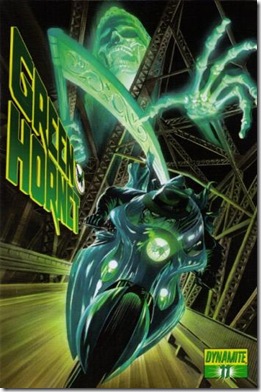 A great story is complimented by equally great art from Jonathan Lau, who is doing some of his best work here.  I’ve always admired his style, but have had trouble before sometimes figuring out what is going on in the panel.  He’s more restrained here, with the exception of a few fight scenes where it becomes cluttered and hard to figure out who is doing what.   Lau is experimenting with white space between panels to great effect.  He also favors the long vertical panel and it gives the book a very stylish look that sets it apart and makes it worthy of your inspection.

The Green Hornet can only keep the peace in Century City as long as criminals continue to fear his wrath. A new Mexican gang doesn’t heed his threats because they serve and are protected by Santa Muerte - - Saint Death - - and kick back a  sizeable portion of their proceeds to the corrupt parishioner who keeps them under control through his Church.

There are some eye-appealing skirmishes in this book that are very cinematic in presentation. A trap set by the Hornet and Kato atop a suspension bridge doesn’t come off as planned and results in the Hornet being cornered by a dirty cop who uncovers his identity and then sets out to bribe Britt Reid.   Just when this fast-paced crime story seems to be kicking into gear a supernatural element arises near the end of Issue #12, which will take it to yet another level.

The pacing is excellent and the dialogue is crisp and snappy.  I like the professional distance that the Hornet and female Kato try to maintain.  You can only sense their attraction to each other in the jabbing insults they use on each other as a cover for a little flirting.   There’s a neat subplot here that has the original Kato traveling to Japan to try and make peace with the crime gang that seems to be seeking revenge on Green Hornet.   I’m in for the ride here for some time.

I’ll probably comment later on the first ten issues of GREEN HORNET  adapting Kevin Smith’s screenplay after I see the GREEN HORNET movie with Seth Rogan.  I’ ve been a little excited by the action scenes in the early previews, but get a sense it’s more of a light-hearted “buddy” movie .  I just hope it’s respectful to the Hornet legend.