By pghhead - May 02, 2017
EDITOR’S NOTE:  I have a lot of admiration for many of the promotional ideas that Valiant is utilizing, from pre-order bundles with extra content, to t-shirts and merchandise, and now partnering with a music festival to meet and appeal to another potential market.  And, they use some of the proceeds to help non-profit charities.  It’s hard not to like these guys!  And their books are pretty damn good.
Valiant to Appear at 2017 Vans Warped Tour®  Dates in California, New York, Washington, and More – Coming Soon to a Town Near You!
Award-Winning Comics Publisher to Bring New Merchandise, Free Giveaways, Creator Appearances, and More to Thousands of New Fans Across the United States in Partnership with Longest Running Touring Music Festival 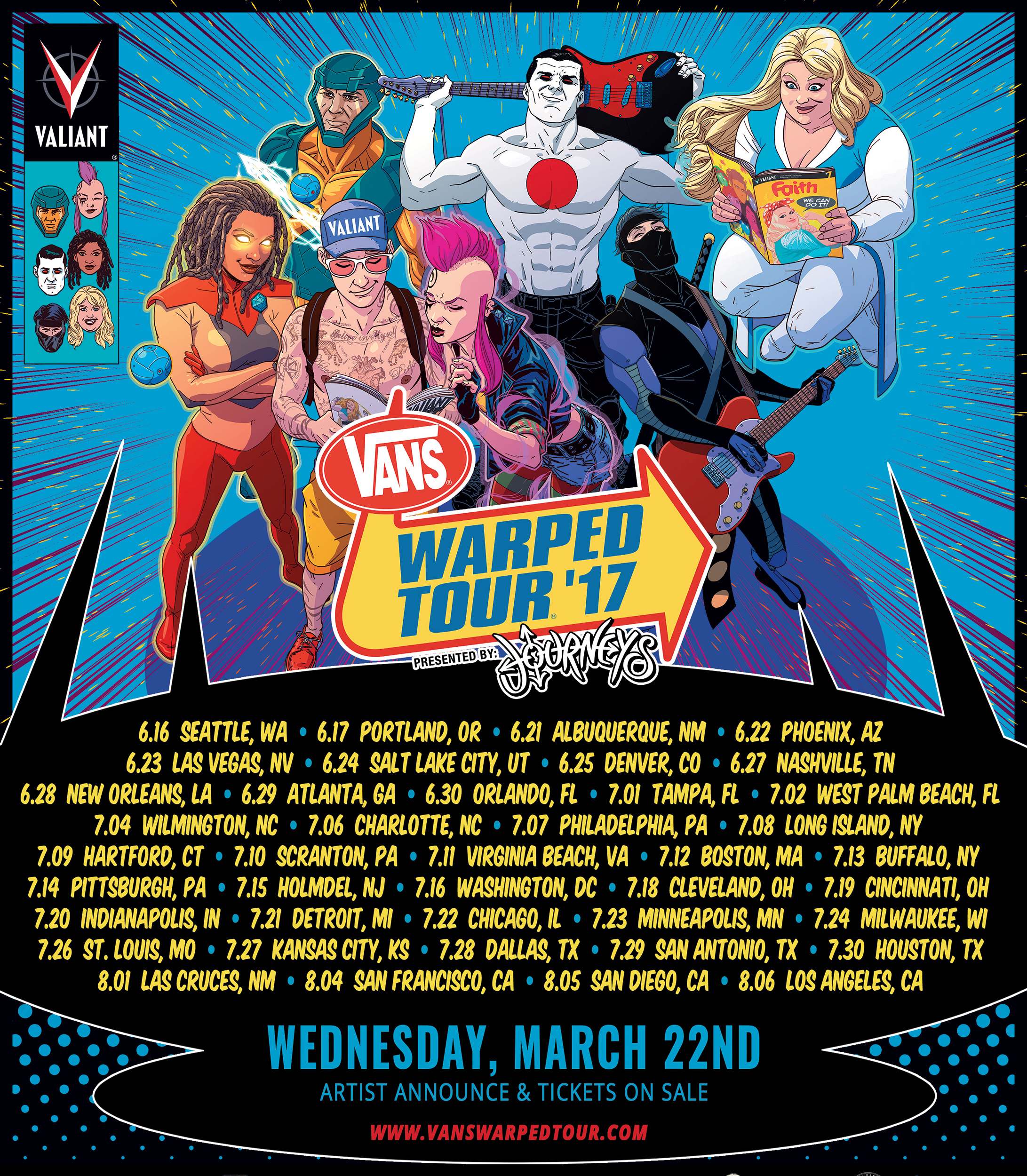 Valiant Entertainment is proud to announce that – in tandem with its ongoing partnership with the Vans Warped Tour® presented by Journeys® – the publisher will exhibit at several 2017 Vans Warped Tour® concert dates across the United States throughout the upcoming summer season! From June through August, Valiant will hit the road with America’s longest-running touring music festival to bring the largest independent superhero universe in comics to tens of thousands of new fans. To mark this unparalleled collision of music and comics culture, Valiant will be offering a never-before-seen selection of free giveaways, new apparel and merchandise, and appearances by major comics creators at the following  2017 Vans Warped Tour® dates:
June 16, 2017
Seattle, WA

In addition to exhibiting with a full-scale convention set-up at these select dates, the collaboration between Valiant and the Vans Warped Tour® presented by Journeys® will continue across the historic tour’s entire summer 2017 season as several of the publisher’s most iconic heroes – including X-O Manowar, Faith, Bloodshot, Livewire, Ninjak, and more – take center stage on the tour’s posters, promotional pieces, merchandise, and more.

Valiant’s appearances on the 2017 Vans Warped Tour® will benefit the publisher’s ongoing charitable partners at The Keep A Breast Foundation – a leading nonprofit organization with a mission to empower young people around the world with breast health education and support.