BC looks at DC REBIRTH, Part 3: The Special Issue

EDITOR’S NOTE:  As the one-year anniversary of this book gets closer (May 25), I review the one-shot annual-sized comic that preceded the transition from the darker New 52 universe to the more optimistic Rebirth universe.  I’ll follow this up later with some reviews of the initial individual Rebirth issues and the series that they jump-started . . . . . . . 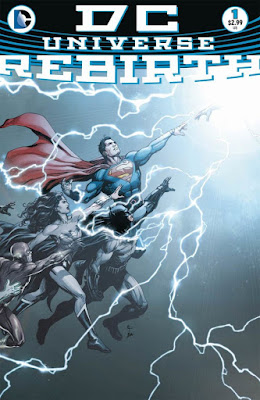 SUMMARY: The entire issue reads as a narrative from the viewpoint of the pre-Flashpoint Wally West, missing and forgotten during the last five years of the DC New 52 universe. The story centers on Wally’s attempt to break free of the Speed Force and cross back over into current continuity. There are also several side journeys, or interludes, throughout the book that hint at new templates for some existing characters like Blue Beetle, The Atom, and the Justice Society.

Wally West reaches out to several persons from his past, beginning with Batman and followed by Johnny Thunder, his former lover Linda, Captain Boomerang, Cyborg, Dick Grayson, and Kid Flash (the other Wally West), before a final desperate effort with the Barry Allen Flash. It takes eight pages before he succeeds at re-entering the plane of existence, eight emotionally-charged pages of the best writing in the entire book. Artists Jimenez and Frank bring the scene to vivid life with the tearful reunion of West and Allen.

There’s a shock ending as Batman walks through the Batcave as if he’s looking for a vital piece of evidence while the narrative captions contain the words of Wally West to Barry Allen.  West’s speech contains a possible explanation for the last five years of the New 52 Universe, as Wally puts forth his theory that outside forces tampered with things and weakened the universe so that they can attack later. In the final splash panel of Chapter Four, Batman finds a bloody smiley face button stuck within the rocks of the Batcave, as Wally concludes “. . . we’re being watched.”

The short epilogue makes even more of a connection to the Watchmen universe with suggestive panels, finally ending with a drop of blood on a yellow clock face.   So, has Dr. Manhattan been tampering with the DCU as so many internet fan sites have speculated?  This issue hasn’t been touched within the various Rebirth titles until just now.  Upon the first anniversary of Rebirth, a new storyline titled “The Button” is beginning in both the Batman and Flash titles.  We shall see.

THE VERDICT: It works very well, for the most part.  The book is beautiful to look at, and each of the four artists really put forth their best efforts. Despite all the information and updates that are jammed into the story, the pacing still works and the story moves forward without causing the reader to be pulled out of it. However, that may only work for readers already familiar enough with the DC universe to understand the current place of all these characters in it. I’m an occasional reader of these titles, but have been reading DC comics for decades. I didn’t have any trouble keeping things straight. A new or casual reader may become confused. But after repeated readings they should be able to grasp everything, and use this book like a Bible.

THE DOWNSIDE:  I’m not happy about The Watchmen universe being dragged into this.  It’s one of my favorite series and I’d prefer that it be left alone.  I’m fine with the way it ended.  A few years back, DC tried to revive this by publishing several Before Watchmen limited series.  I bought the books and then ignored them. I just didn’t have the heart to read them, worried that they would diminish the greatness that was Allan Moore’s Watchmen and somehow tarnish its reputation. I’m going to read them eventually.  And, I’ll probably check out “The Button” storyline - - but I have a bad feeling about this.

STORY:  Geoff Johns (the ultimate DC fanboy, and one hell of a good writer) is the perfect choice to sort all this out and lead readers into the next big thing - - he pulls it off!  2.5 POINTS

ART:  Some of DC’s best artists are right here. Each team illustrates a different chapter.  The art is dynamic, the colors vivid, and the transitions between different artists per chapter is smooth.  3 POINTS.

COVER: Been to the Sistine Chapel lately?  If Michelangelo was still alive, he should ask DC for a royalty fee.  But a great choice of homage cover and very appropriate to the storyline. 1.5 POINTS.

RECOMMEND?  Yes. Essential if you are going to read any parts of the DC Rebirth. Yes, for 70 pages of good super-hero story for just $2.99. (First printing) Even the reprints are a good value at $5.99.  1 POINT. 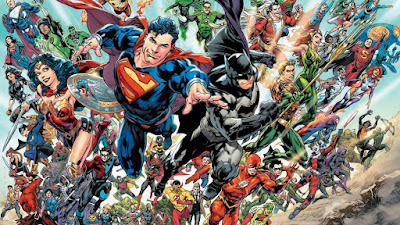