Some thoughts and opinions on Free Comic Book Day  (FCBD) 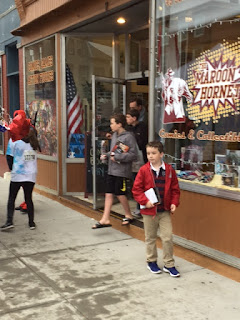 I’ve seen a lot of changes in both the popularity of comics fandom and accessibility to this beloved pop culture phenomenon in the 17 years since I moved to the southeastern PA area.  It’s grown exponentially year after year.

As I look to identify the factors that had the most  influences on that, I keep coming back to two key events:

1)  The increasing popularity of super-hero movies.  While there have been super-hero themed movies releases for as long as I can remember, it was the 21st century advent of new movie magic technology and computer generated images that allowed filmmakers to finally give comics-themed flicks the amazing visual treatment that they deserved. This started with the first X-MEN movie, but really picked up steam in 2002 with the release of the first SPIDER-MAN movie, both from Fox.  When Marvel Studios became involved it went to another level entirely — one blockbuster after another, year after year.

2)  The introduction of FREE COMIC BOOK DAY, which began in 2002 and was intended to coincide with the release date of the Spider-Man movie, occurring on the same weekend (first weekend in May). 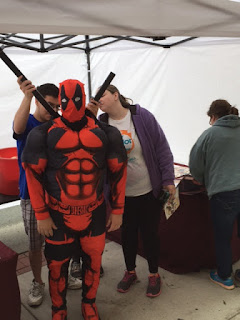 Those two events helped increase awareness of the amazing story-telling potential of the comic book medium and helped bring new readers into local comic book shops, many for the first time.  Comic shops received a new influx of much-appreciated customers and increased business.  This helped them to survive and attracted other like-minded entrepreneurs to open comic book shops.

This time was unlike the events that brought about the increase of comic book stores in the late 1980’s and early 1990s.  Then, it was speculation in the financial market that collectible comics were a sure-fire investment.  New shops opened. Publishers flooded the market with multiple covers and other gimmicks.  Investors purchased extra copies of issues, hoping for a giant increase in value so they could sell later at a huge profit.  It didn’t last long, until the whole thing crashed and many shops closed  their doors.  This time, most of the owners entering the business are doing it for the love of the medium.

Back to FREE COMIC BOOK DAY.  The first one in 2002 was a success. The idea to tie into a movie opening was a smart move.  FCBD became an annual event, always occurring on the first Saturday in May, which also coincided with the opening of a major super-hero movie in all but two years (2005 and 2006).

Those two events helped generate interest in comic books. But the real difference maker was the local comic book shop.  They were the ones that helped out the first-time customers, answered questions and helped them select their first books, and played a large part in creating new fans and growing the audience for comic books and similar entertainment. 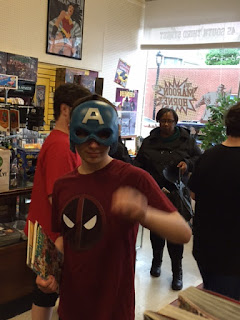 Which brings us full cycle to today.  There are numerous comic shops within a one-hour drive of my residence, regardless of which direction I drive in or what states I pass through ( Pennsylvania, Delaware, Maryland, New Jersey). That serves as evidence that the market for comics books may be at an all-time high.  More shops are opening or expanding. New publishers, both small and large, continue to enter the market.  Life is good in the comic book world, don’t you think?  (Hold that thought, please).

In my area, the biggest and best FCBD event occurs at Captain Blue Hen in Newark, DE.  They feature cosplayers, guest artists, activities and art classes throughout the day, and really draw a huge crowd that generally exceeds 1,000 persons.  The other good FCBD occurs at The Comic Book Shop in Wilmington, DE —where they stretch things an extra day before wrapping up on Sunday afternoon. This year, I didn’t drive to either one of these events.  But don’t feel sorry for me.  I’ve experienced the magic enough times at both places for the memories to keep me going.

This year, for the very first time, I was able to walk to a FCBD event.  The small town of Oxford, PA  (where I reside) witnessed the opening of a dedicated comic book shop, The Maroon Hornet, in October 2016. 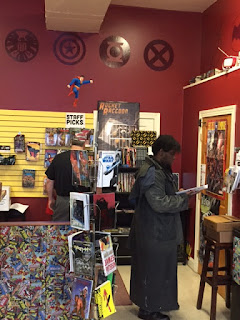 While I knew that they would not be able to offer a FCBD on the same large scale as other comic shops, I wanted to show my support by attending their event.  I went one step further.  I helped out inside the store so that the manager (Randy) could remain outside to meet and greet customers (as Deadpool) under a tent set up beside the sidewalk. The owner (Lori) was then able to work the front desk while I assisted customers within the store.

There were already almost a dozen people waiting for The Maroon Hornet to open its’ doors at 11 a.m.  Attendance was steady all day. For the staff, it was their first ever Free Comic Book Day event, and they were not sure what to expect.  They ordered a generous but modest amount of comics to give out, choosing six key titles, and limiting the giveaway to one per customer.  The Teenage Mutant Ninja Turtles book was the most popular, and they ran out of copies of this before any other books, followed by The Secret Empire FCBD title. At 3:30 p.m., they handed out their last remaining FCBD title.  Late-arriving customers didn’t even mind. They just came for the camaraderie. And the gourmet popcorn.

The enthusiasm of the customers left us all with a positive impression of the comic book fan base in Oxford, PA and surrounding area - - and lent some reassurance to the idea that a small town can indeed support a comic book shop.  Many customers stated their appreciation for having a comic book shop so close to where they live.  Some were even giddy with excitement.  The highpoint of the day occurred when Lori was handed a personal note written by a grade-schooler, thanking her for providing a source for her reading hobby.

What some fans may not realize is that even free events come at a cost.  Comic shops have to pay for the extra staff, sometimes security, traffic assistance, and parking spaces, as well as the extra activities and events for the day.  While the comic books are free for customers, the shops have to buy them.

The Maroon Hornet kept things within their operating budget, and will probably increase how much they put aside for this next year and after.  Just imagine how much money a shop like Captain Blue Hen must have allocated for the FCBD titles.  Publishers and distributors benefit from the increased attention that the local comic shops provide on this day.  Here’s hoping that it’s worth it for every single comic shop, as they have to bear the brunt of the expense.

So, if you participated in FCBD 2017 - - please remember to thank your local comic shop for holding the event and show them some appreciation in the coming months by supporting them with your comic purchases.

Since the shops had to buy these books, I’m just wondering how much this cost the sole distributor (Diamond) and the various comic book publishers?  Diamond can’t exist without the local comic shops.  There’s just not enough business from the large book-sellers and other places that sell comics to support the sizable business that Diamond has become.  And the publishers aren’t going to enjoy increased sales numbers without some dedicated, knowledgable and enthusiastic comic store employee helping to build their audience.  Seems to me that the distributor and the publisher should cover the development, design, production and printing costs of the FCBD titles and actually charge nothing to the local comic shops. That seems fair to me.

THE PHOTOS:  Happy fans leaving with FCBD deals;  It takes 2 people to outfit a Deadpool; the Captain America fist bump;  Inside the store;  Parking outside the store. 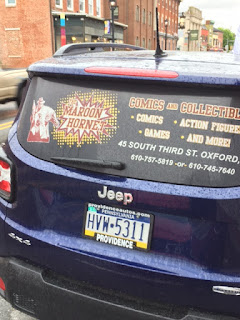