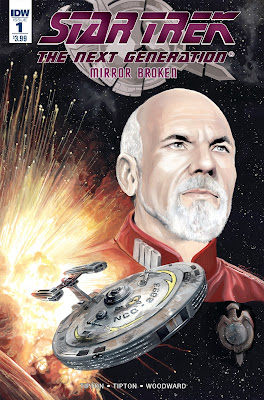 This is the book that sold out at the distributor level, and is already scheduled for a second printing. As a service to my readers, I take an advance look (digital copy courtesy of IDW) in order to answer the question on some of your minds = “Should I try to get a copy of the first printing?”

If you pre-ordered, you’re all set.  Read and enjoy.  For the rest of us, that depends on your level of interest in the Star Trek world.  Keep in mind that you won’t have to wait long for the second printing. You can pre-order a copy of that now. If you’re a big Star Trek fan, don’t wait. Try to find a copy.  If you’re just curious (as I was) you can probably afford to wait.

The story takes place in a Mirror World, a copy of the Star Trek universe with some important differences.  The big change as far as The Next Generation version goes is a slightly different crew aboard the ISS Stargazer (and not the Enterprise). Captain Jean-Luc Picard is still in charge, but wearing a goatee as well as a sleeveless muscle shirt (new crew attire).  The android Data is now second-in-command.

A two-page summary outlines the differences in this universe.  The Empire has replaced the Federation, and is very profit-minded and power-driven. The Vulcan Spock later took over as Imperial Commander and put in place reforms to make the Empire more diplomatic and peaceful.  However, a Klingon-Cardassian alliance all but wiped out the Imperial fleet, with only a handful of ships remaining.

Morale is low aboard the Stargazer, and crew members are wary and suspicious.  A rumor has been circulating about an advanced new warship, of which the name may or may not surprise you.

The Mirror World Picard still uses the same catch-phrases but is rougher and less caring, a bit of a schemer/manipulator in the first issue. When The Stargazer encounters a disabled Cardassian cruiser, readers familiar with The Next Generation series will be surprised by what happens.

STORY:  There is quite a bit of set-up required before this story can get underway, and most of the first issue is dedicated to doing just that.  That indicates to me that this should be a complex and engaging plot.   2 POINTS

ART: The art is gorgeous.  The best words I can find to describe it are “photo-realistic”.  On some pages, I had the suspicions that some character shots of the main series actors were photo-shopped and cropped onto the drawn bodies. However, some extra feature pages in the back give testimony to the artistry at work here. 2.5 POINTS.

COVER:  Nice head shot of Picard that features the changes in his appearance. 1 POINT.

READ AGAIN?  Yes. Maybe wait until the series concludes and read it over, but there’s enough here to enjoy again. 1 POINT.

RECOMMEND?  A 100% ironclad recommendation to ST:TNG fans. To others, if you like space opera and science-fiction stories, you’ll want to check this out.  1 POINT.