We did not follow the CIVIL WAR II storyline, which just wrapped up.  The reason is not that we thought it would be a mediocre story. Rather, we prefer not to get wrapped up in storylines that require purchasing so many books in order to follow.

On the positive side, it does allow the Marvel stable of writers to explore a theme with great depth.  However, it also includes a number of books that link to the event and really only serve as padding and below-average filler. We’d rather not get wrapped up in sorting that out. 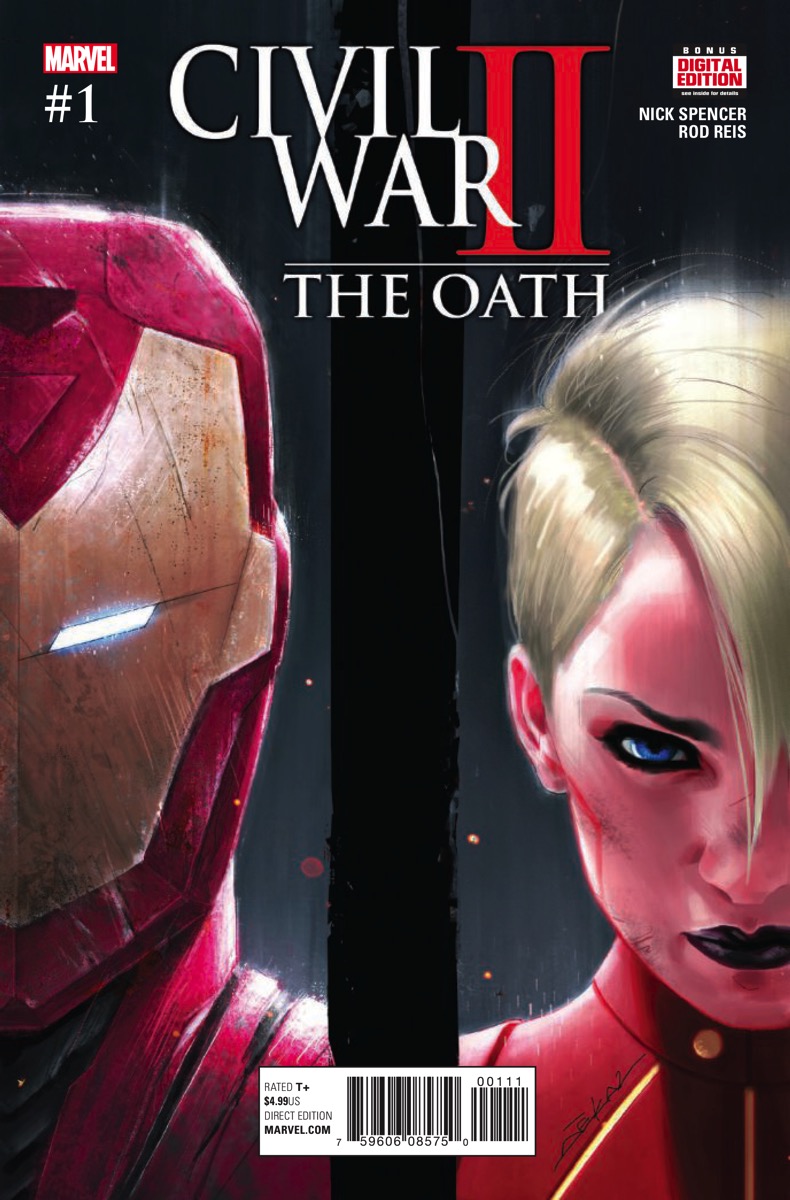 Like most everyone else, we’re on a comics budget and would rather purchase books that span more genres and more publishers.  I don’t want to let a single publisher or genre (super-heroes) dominate what I choose to read. We realize a solution to this would be to just purchase the core CIVIL WAR II title and leave it at that. Maybe we’re not disciplined enough to do that, so we just avoid the event altogether.

I gave a similar explanation when a good comics friend asked me if I had read CIVIL WAR II: THE OATH.  He was very enthusiastic in his endorsement of it, and his offer to loan me a copy was persuasive enough that I accepted. I’m glad I did, and I’m glad he supported the book so much.  Good comics need cheerleaders; and sharing our discoveries is what a big part of this hobby is all about.

CIVIL WAR II: THE OATH is essential reading for comics fans that follow the Marvel titles on a regular basis. This one-shot issue serves as a necessary bridge between that mega-event and the next Marvel mega-event to follow — which features Steve Roger’s Captain America in a very prominent role.

While I can’t claim to be an expert on what’s been going on in the Marvel books, I’m aware of enough of it to qualify me to write about it. (Marvel fans are welcome to correct me on any unintentional errors.)

I doubt I’m spoiling it for any readers when I summarize what’s been going on in the CAPTAIN AMERICA books. Steve Rogers was subliminally programmed during his young adult life to be receptive to Hydra, and those unconscious urgings were recently brought to the fore by a Cosmic Cube.  This is the major storyline that writer Nick Spencer has been developing, and will soon see fruition as the next Marvel mega-event. Following the events of the Civil War, Captain America has just been appointed the new head of S.H.I.E.L.D with increased authority and influence.

This is a book that is heavy on the dialogue, and heavy on the symbolism and implications. There are numerous allusion s to the Presidential election and recent political events.  You can ignore them, and just read this as a straight-up narrative, but that’s hard to do. What I admire most is that Captain America’s words can be construed to apply to both sides. Whether you stand for Trump or against him, support the Democrat or Republican platforms, regardless of your views on immigration, national defense, etc. - - the story is written in such a way that readers may feel that Captain America is addressing their individual concerns or beliefs.

Captain America’s acceptance speech is a real piece of word. We can imagine how much time and thought Spencer put into the crafting of it and the subtle phrasings. Steve Roger’s words to the American public seem to reflect his values, yet there are a few disturbing things about them. 1) I can’t recall him ever criticizing other heroes or decisions in public before - perhaps the influence of the Cosmic Cube makes him a little harder and a little less diplomatic, and 2) Knowing that he’s an undercover Hydra agent makes his words suspicious. I read them thinking that he really doesn’t mean them.  Nice job, and kudos to the speech writer.

While I admire what Spencer is doing here, and respect his skills  - - I’m not a fan of this — especially what the big reveal at the end of the book implies.

We’ve read Captain America on and off over the years, and feel that he’s really out of character here. While I realize that he’s been subliminally programmed and corrupted by the power of the Cosmic Cube, the Steve Rogers I know would fight back with every fibre in his core to resist, and win out based on his convictions and strong moral code.

The Captain America that I love most is the one who makes no judgments about others who are different, extends his helping hand to all, and exhibits the patriotism and support of proper national values. In the current times of suspicion of government and the media, selfishness, rudeness, and egomania - - I prefer to never doubt who Captain America is and what he stands for.

Sure, this is a temporary change for the sake of a good story that may take one, two or four years to play out fully.   I prefer to wait until then to continue reading about Steve Rogers.

STORY: This is an outstanding piece of writing, regardless of how you feel about what’s happening in the book.  There’s almost zero action in this issue, aside from a brief Hulk bar fight.  It’s all talk and conversation. Yet, the dialogue and oration is so engaging that it holds your attention to the very end. 3 POINTS.

ART: I’m can appreciate the effort, but I’m just not a fan of this washed-out painted look. The colors are too drab. On the plus side, there are several artists utilized to complete this book (maybe too many pages for just one artist to make the deadline), and it almost looks seamless. They all tried to utilize the same style, with a couple exceptions that really stand out because of the amount of color used on those pages. I prefer the color and the backgrounds over the muted pastels and lack of secondary details.  1.5 POINTS

READ AGAIN?  Yes. You can’t assimilate everything that’s going on here, and it requires multiple readings to grasp all the meanings and symbolism.  1 POINT.

RECOMMEND?   Yes, with limitations.  A big recommendation to readers that have been following either Civil War II or Captain America.  If you’re not a Marvel reader and chose this book to become familiar with these characters, you will be confused and/or lost.  0.5 POINTS.

TOTAL RATING: 8 POINTS. Solid. If you are a Marvel fan, this book is essential reading.