Garth Ennis has always been my favorite comic writer.  Rather than tell simple one-note, three-act stories he always seems to be able to write tight but rollicking stories with good pacing and often with an ending that can leave one staring slack-jawed at the final page.  The brutality he brings to stories is rarely solely for shock value (except for maybe the series Dicks) but instead is a realistic depiction and necessary ingredient of the stories he likes to tell. 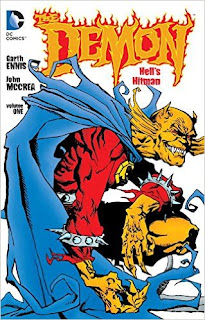 Although many artists contribute to this run, Ennis starts out with his longtime collaborator, John McCrea.  Having previously collaborated on Hitman, The Boys: Herogasm, and the aforementioned Dicks, McCrea can use his art to bring Ennis’s twisted visions alive as few others can.

This run, as collected in the trade paperback The Demon: Hell’s Hitman, opens with a one-shot story of Etrigan fighting a biker gang that has desecrated a church for the purpose of raising demons. This is followed up by a long arc in which Etrigan has been named Hell’s Hitman and takes a more active role on Earth by hunting down fugitives from Hell.  He teams up with Tommy Monaghan, better known as Ennis’ creation, Hitman, after a demon hires the followers of the First Church of the Televangelist to attack Etrigan with holy implements.  Etrigan's new role causes tension with the Demon’s host, Jason Blood, who is trying to decide what his girlfriend’s pregnancy means in light of the fact that his alter ego gleefully delights in destroying everything he loves.

Another arc shows the Demon fighting resurrected Nazis with the help of four geriatric WWII vets in a tank inhabited by the ghost of a Confederate general.  The final issue is a one-shot which further explores Jason Blood’s attempt to learn the Demon’s plans regarding Blood but reveals a much more sinister turn than the reader could have anticipated.

The writing across these books is phenomenal with Ennis at times inventively using the Demon’s rhyming manner of speech to slip in dirty limericks, cheap shots at other superheroes, and other obscenities.  While the Demon is front and center for much of it, Ennis gives Blood true pathos as he attempts to cope with the possibility of being a father and all the danger that would entail.

Ennis clearly draws on his other works and inspirations throughout his run, especially with the Hitman team-up and his Battlefield-esque allusions. Ennis is a master of antiheroes and draws you into the story of the Demon, even though the character remains purposefully unlikeable throughout.  He artfully mixes humor with ultraviolence, such as in a bar scene where the Demon burns a bartender’s arm flesh off up to his elbows.  When the bartender complains he can no longer pick his nose, Etrigan bites it off announcing he has solved the problem.  Ennis writes what he knows while keeping the tone consistent. 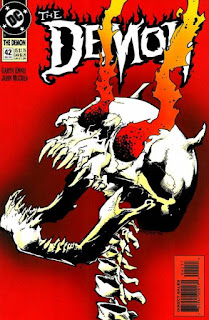 John McCrea’s art masterfully captures Ennis’ world.  While the gore is often front and center, it never obscures the rest of the panel.  In short, no one can show a man staring at his own torso while being disemboweled like McCrea.  The art is realistic and not exaggerated for shock value, though it does indeed shock.  Walking the line between ultraviolence and torture-porn is done masterfully.  Close-up shots of the Demon’s face show every crag and wart in exquisite detail.  Though the other artists that follow up McCrea do not reach his heights, the art style remains consistent with its emphasis on grime, shadows, and destruction.

McCrea also does most of the covers, even in issues for which he did not contribute inside artwork.  While all are amazing, the covers for #40 and #42 stand out.  #40 is just a depiction of The Demon crouching, but his mischievous grin contrasted against his flowing and jagged cape captures the character perfectly.  #42 is a demon skull with big incisors with all the flesh burnt off and fire escaping from the eye sockets.

Though not for the faint of heart, this trade should be embraced by Demon, Hitman, and Ennis fans alike.

Note:  The author would like to thank pghhead for his generous gift of The Demon single issues upon which this review is based.