For many years I was an avid science-fiction reader, doing my best to keep abreast of the field and stay familiar with the cream of the crop. Yet, I never encountered the Mutant Rain Forest, and so escaped it’s alluring tendrils.  Now, after wandering inside and becoming lost in VISIONS OF THE MUTANT RAIN FOREST, I find myself entwined in the enchantment.

Still, I have managed to untangle myself long enough to w 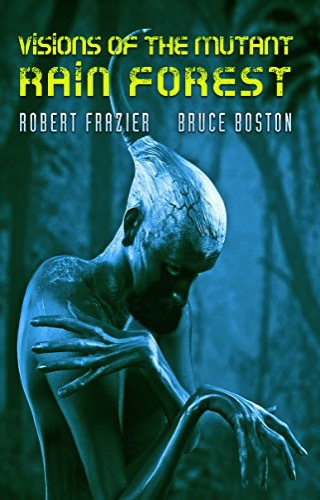 rite this review and warmly welcome new travelers to the wonders of bedazzling descriptions and captivating characteristics that encompass a continent-wide swath of rain forest out of control and on the warpath. Apparently occurring in some unspecified future, the rain forests of South America have adjusted and adapted to civilization’s assaults on the environment, linked up and gone on a territorial campaign to engulf the entire continent.

Authors and SFPA Grandmaster Poets Robert Frazier and Bruce Boston created the Mutant Rain Forest together and have explored it since the late 1980s in poems and stories, both collaborative and solo works.  Their collaborative poem “Return to the Mutant Rain Forest” was named the All-Time Favorite Science Fiction, Fantasy, or Horror Poem in a 2006 Locus magazine reader survey.

VISIONS OF THE MUTANT RAIN FOREST collects eight stories and thirty-nine poems and verse, and is interspersed with a smattering of black and white illustrations. Two of the stories are original to this collection, as well as five new poems.

Rather than a linked narrative, the book reads more like a tropical travelogue. Yet, the descriptive passages contain such vivid images that glossy photographs could never do justice to them. The rain forest is simply too vast in length, width and depth that not even a panoramic lens could accurately picture its’ grandeur.

From necrophida moths and Kongii sloths to blue deundes and shadow monkeys the rain forest is awash in mutated lifeforms. Dispersed within the green foliage continually growing and spreading everywhere live neon toucans, diablo fantasmas, and howler monkeys.  The gargantua trees grow as tall as skyscrapers and Jaguar men live in tree villages in the uppermost reaches. Large sentient termites communicate through a hive intelligence and have the ability to come together and form man-like shapes.  Having the flora and fauna delineated through poetic verse allows them to manifest within the reader’s memory bank.

You won’t soon forget the images.

Most disturbing is “The Death of a Dome City” which could serve as an end piece in it’s telling of the last outpost choked off by the surrounding forest.

The short stories are all memorable and chilling. Among the best are “Holos At An Exhibition of the Mutant Rain Forest”(a holographer searching the forest for a cat-like humanoid), “Going Green in the Mutant Rain Forest” (being absorbed by a tree), “Cruising Through Blueland” (rebels battle a high tech army in a restricted zone of war games), and “The Tale Within” (a jungle guide is more than meets the eye). We were especially impressed by “Surrounded by the Mutant Rain Forest” (a tale of love and transformation).

There are enough elements of science fiction, fantasy and horror within VISIONS OF THE MUTANT RAIN FOREST to satisfy all readers of these genres.

DISCLOSURE: A free digital copy was provided by the publisher, with the hope of an unbiased, honest review.