By Ken of the Comics Podcast of the Damned - March 27, 2015
World War Z is movie that shouldn’t be any good. The source material was a collection of stories from individual survivors that never intersected, leaving nothing useful to make a movie out of other than the title. Max Brooks, the author of the original book, is the spoiled rich kid of Mel Brooks and insists he created the modern zombie and decries anyone else’s work. The movie is PG-13 which is odd for a zombie movie. Add to all this, the movie being pushed back to do last minute re-shoots to accommodate negative preview reaction. 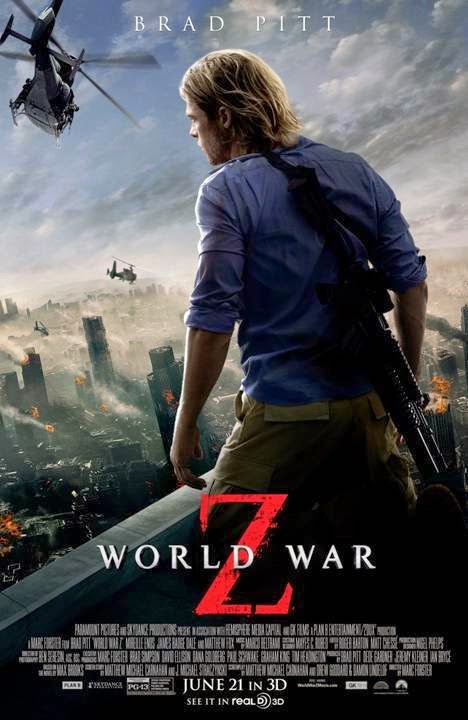 With all this against it, it’s amazing that the movie is actually my favorite of the summer so far. The source material was thrown out to create a totally new story. Max Brooks was passed over for script writing duty with J. Michael Straczynski actually writing the first version. The edits that make it PG-13 don’t detract from the story and the re-shoots obviously did what they were designed to do.
Gerry Lane (Brad Pitt) is a retired UN employee who is going about his normal life when the zombie plague overtakes his hometown of Philadelphia. Rescued by his previous employer, he quickly realizes he has been drafted back in to service as he jet-sets around the globe in a desperate attempt to find Patient Zero and find any clues that might turn the tide against the masses of undead.
The set pieces of multiple countries allows a little from the book to seep through as far as various defense scenarios and how the dead eventually overcome them. It’s always in the background and used as a plot device that would have to occur anyway.
The characters are all well fleshed out and the dynamic between husband and wife is instantaneous and believable despite the chaos that unfolds mere minutes into the movie. Gerry has a UN military escort but is not a stereotypical shotgun-wielding bad ass. That he survives his encounters with the undead is mostly due to luck and some planning.
The one part of this movie that propels it to be a five star review is the ending. In most zombie movies, the protagonists die until it comes down to one sole survivor (and sometimes his girlfriend, if she’s lucky). Although this movie does rack up an impressive body count, it manages to avoid this trope and the ending is one that convincingly dawns a new morning for the human race.
Note on 3D: All done post production. I saw it in 3D but aside from some falling zombies, it didn't have enough moments to be a great 3D film.  Suggest watching in 2D.
Final rating (out of 5):