EDITOR’ NOTES:  Noted comics and fiction author Duane Swierczynski will be signing both THE BLACK HOOD from Archie Comics as well as his latest novel, CANARY, at THE COMIC BOOK SHOP at 1855 Marsh Road in Wilmington, DE on Sunday, March 8 from 12-3 p.m.  I greatly enjoyed his work on BLOODSHOT and HARBINGER WARS for Valiant and those reviews can be found in our 2014 and 2013 archives. As a public service to our readers, we explore some of his earlier works here . . . . . . . .

X first came to my attention back in the 1990’s as one of the heroes featured in the short-lived Comics’ Greatest World series of connected titles from Dark Horse.  He did not make much of an impression at that time, and in a way he was buried beneath an avalanche of brand-new super-powered characters.   His later revival in several episodic shorts in DARK HORSE PRESENTS #19-21 made a bi 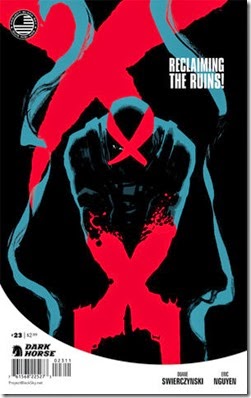 gger impact and gained a little notoriety.  However, when Dark Horse decided to repackage those 8-page shorts as a full story in X #0 the full impact of this new take on the character really came into being.

The monthly series is now up to Issue #23, and the story arcs have been complied in four trade paperbacks, with the most recent one reprinting the story from Issues #13-16. I need to catch up, since my reading has not extended beyond Issue #8.

Utilizing a main character with apparent Punisher-like motivations (which are yet to be explained), X #0 stripped the story down to all-out violence and brutality.  Kill shots, car bombs and nail bombs, severed limbs, and blood, blood, blood are featured prominently. This issue served quite well as an in-your-face prelude to the first four-issue story arc.  X ‘s suit is mainly black battle gear with X’s marked in prominent places, most notably the hood. Seeing X advance upon an opponent with a big bold red X across the face piece with just a single eye revealed (is he half-blind in reality?) makes a menacing and frightening site.  The setting is Arcadia, a town in decline and over-run by criminals and corrupt politicians.  X’s modus operandi is to mark an X over head-shot photographs and then mail them to his intended victims in advance of his coming.  A photo with a single slash is a warning.  A photo with an X over the face is a death sentence.  He’s coming, and his advance is relentless.

Issue #1 opens where X #0 left off, with an elderly patrolman for Arcadia dock security discovering the scene of the carnage that ended that story - - lots of dead bodies and lots of blood.  The police try to cover it up and burn down the building.  After all, many of the crooks who grease their palms were involved and they’d prefer to keep it out of the press.  Too late.  A female web blogger, XOXO (dubbed “the last muckraker”), has inside information on what happened and posts it online. 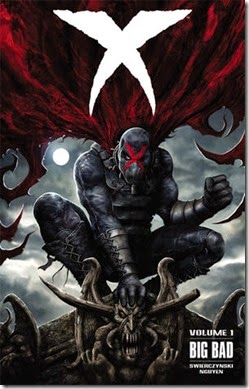 Her investigation continues as she tries to figure out who X will target next.  The police have figured it out and they set a trap for X.  More bullets.  More blood.  You can certainly count on X to help scratch that itch on the dark and bloody side.  XOXO and X eventually meet, and she helps him out of a tight jam.  Now they are both wanted by police and gangsters. But, X isn’t sharing his identity or plans with anyone, including her (and us).  He’s so secretive his mask/cowl is locked onto his neck so it can’t be removed and reveal his face.   I almost forgot to mention the explosions in X #1, as well as the bleeding, the human bombs, mutilation at knifepoint, and brutal bare knuckles fighting.

The first story arc centers around X’s determination to get to Berkshire, the last remaining kingpin of the Arcadia underworld, and his introduction and later team-up with XOXO, real name Leigh. On the third attempt, X succeeds in viciously lacerating the head honcho's face.  Leigh’s connection to X becomes known to both the underworld and the corrupt police force, and she soon becomes a fugitive on the run as well.  But not before some intervention by X, which results in more  criminal cronies losing limbs and some special police forces severed by spring-loaded razor wire.  Appropriately enough, the only procedure the plastic surgeon has of rebuilding Berkshire’s face is to graft some pig skin onto his features.    Berkshire makes a valiant attempt at revenge on X, and manages to maul and bruise him in brutal fashion. But X prevails, as he also fights dirty.

As Issue #5 opens, X has a nightmare where his face is revealed, and it’s horribly disfigured.  But it’s a dream, so we can’t be sure that is his actual look.  Leigh reminds him that with Berkshire out of the way, the mission is done but X doesn’t agree with her:  “Criminal nature abhors a vacuum.”  Tension mounts between the two, as X begins to use Leigh as bait to lure the criminal element into his traps where he can dispatch them with ease.  This does not sit well with Leigh, who begins to doubt her partnership with X and urges him to use less finite measures. Meanwhile,  a police narcotics squad headed up by a crooked lieutenant gets a bloody warning from X to make them stop planting drugs and setting up lowly shop-keepers to make it appear that they are doing their job. To keep from seeing his “dogs of war” disbanded, Lieutenant Jaffe sets up a task force to hunt down X.  Knowing that X has a code of honor and won’t fight “good cops” he stacks the roster with only honorable rookies and other “good cops”.

Some residents of Arcadia consider X a serial killer, and Leigh tries to soften his image by persuading him to take less drastic measures. She knows he’s not a ruthless killer and nothing more 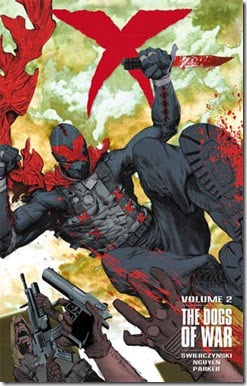 , and realizes “he’s in a desperate struggle to save this city.” And  she’s trying to help him . . . “maybe even convince him that he doesn’t need to kill people anymore. There are other ways.”

“You’ve underestimated the power of public shaming, “ she tries to persuade him. “Let people ask their own questions, namely ‘what did that son of a bitch do to deserve this’”. X gives a classic response:  “Arcadia has a cancer.  You don’t shame cancer away.  My method is surgical. Identify the tumor. If it’s not benign, excise it. Move on to the next tumor. . . . .. besides, the kind of scum I hunt won’t be shamed out of anything.”

The second story arc ends the way you would expect it to end: in blood. Buckets of blood. One of the opponents makes a mistake about who might or might not be the appropriate human shield.

Issues #5-8 are collected in the trade paperback X Volume 2:  The Dogs O 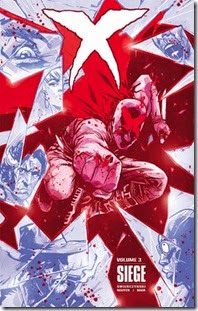 At that point I stopped purchasing the single issues, with the idea in mind of getting the trade paperbacks as long as the title maintained the same intense story-telling and dynamic art.  It did, but my comics budget required me to down-size somewhat.  I hope to remedy the situation this weekend at The Comic Book Shop, and maybe get some autographs as well.

X Volume 3: Siege collects issues #9 through 12, which features the introduction of some psychotic villains, including some f the original characters from the first Comic’s Greatest 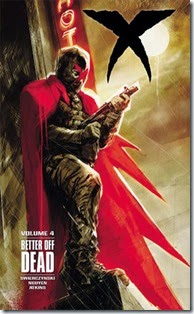 World X series.  Some of the secrets of X’s past are also revealed.

X Volume 4: Better Off Dead collects issues #13 through 16 where X takes on a huge army of villains without benefit of assistance from his former allies.

Bloody good!  If you miss the Punisher MAX stories as told by Garth Ennis this is the book you want to read.  In it’s own way, it’s even more brutal and gritty.