Valiant stops at CBH for Ninjak, shows off The Valiant Car 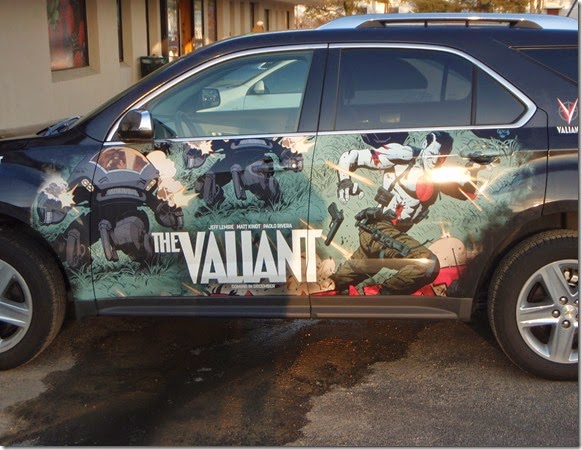 A very exclusive vehicle was parked outside the entrance to Captain Blue Hen Comics in Newark, Delaware yesterday.  It was all part of the celebration for the release date of NINJAK #1, which dropped into comics stores on Wednesday, March 11.

It turned out to be a better-than-average new release Wednesday for the CBH store as well, with copies of Ninjak and other Valiant titles being picked up.  Many new readers to the Valiant line received their introduction and recommendations via Captain Blue Hen staff as well as Valiant Marketing Representative Matt Klein. 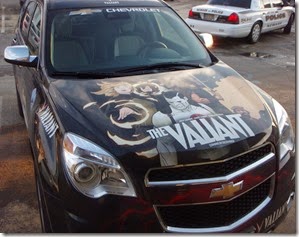 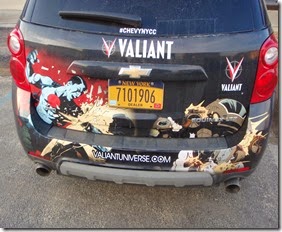 Above photos: Front and rear views of the customized Valiant vehicle. 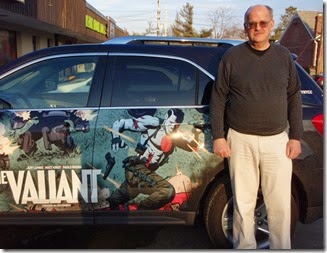 Photo, far right:  Aspiring actor Mike Clarke fails his one and only audition for the BLOODSHOT movie, when it becomes easily apparent that he bears no physical resemblance whatsoever to the title character.  Better luck next time, Mike.

Matt Klein proved to be very knowledgeable about all things Valiant, and waxed enthusiastically on the latest news. It’s been a big week for Valiant, with the earlier announcement of a large movie deal as well as the introduction of the NINJAK title and the upcoming BLOODSHOT REBORN.  Matt spoke about various news and insider information at VALIANT like the excited, giddy new employee that he is, fresh off his previous job at Forbidden Planet Comics in New York City.  So, those tidbits remain a secret between the two of us, since I have no desire to get him in any trouble with the head office for revealing news before its time.  Actually, he really didn’t share anything with me that’s newsworthy - - I’m just trying to give myself some credit here for attempting to pry it out of him.  He’s a savvy marketer.

Some great promotional items were available during the event, from posters to $1 introductory issues, gold editions, etc.  I now have a nifty little shot glass with the Quantum And Woody logo that I’ll have to save for sipping my best Scotch (per Joe Murray’s recommendation).  The Captain Blue Hen store now has a new video that loops through all the promotional videos for new and upcoming Valiant titles. 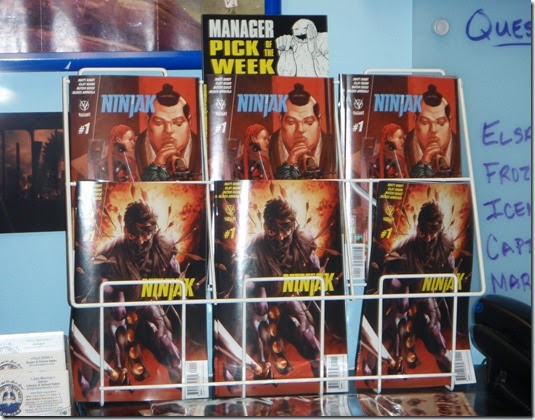 The pick of the week for March 11, 2015 is NINJAK.  The store had an ample supply of Issue #1 in two different covers.  My favorite is the standard cover, seen on the bottom of the rack above.