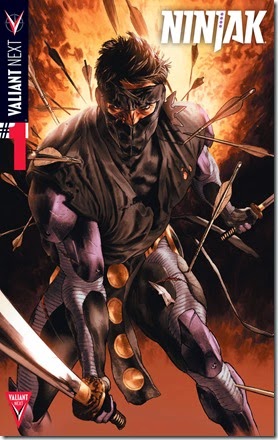 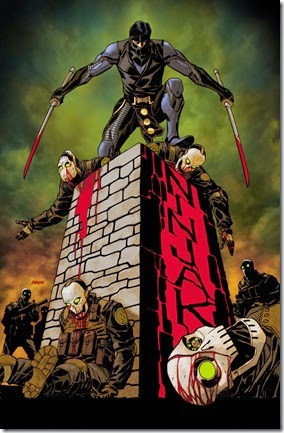 This book is a delightful blend of stylish cold-war era super-spy adventures, high tech weaponry, and classic ninja warfare.  It reminds me of Sean Connery JAMES BOND movies and the best version of Marvel’s SHANG-CHI MASTER OF KUNG FU- - - the stylish exciting volume from the 1970’s scripted by Doug Moench and gorgeously illustrated by Paul Gulacy.  In Valiant’s latest NINJAK #1, scripter Matt Kindt adeptly juggles those genres while artist Clay Mann dazzles with his muscular battle scenes and diagonal panel highlights.  This is first class action adventure escapism, all awaiting readers in the pages of a comic book. 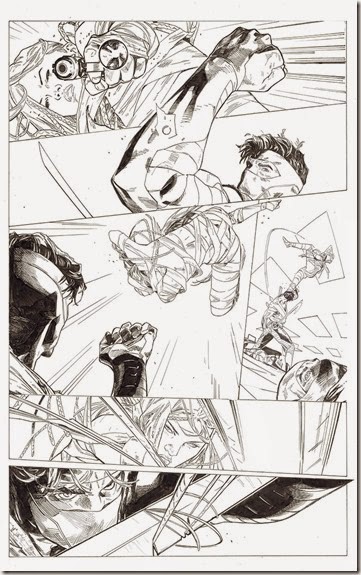 One of the delightful benefits of reading Issue #1 of NINJAK came as a total surprise:  there are more reveals into the background and character development of Colin King (a.k.a. Ninjak) in this one issue than I remember in all of the past versions of this character - - and I’ve read them all.

The latest version opens up in the past with panels depicting a wide-eyed school boy sitting in the front row of a movie theater matinee munching popcorn and thoroughly immersed in the ninja movie up on the screen.  The main character in the film makes a hard-boiled remark that obviously makes an impression on young King, as years later he makes the same remark during a dramatic rescue of a similarly bad-assed Russian ninja agent.  We also learn that, like Bruce Wayne and butler Alfred, young Colin King was often left in the care of the family’s manservant who may have been abusive and employed a heavy belt buckle for punishment and creating trauma.

The main version of the story centers around  Colin King/Ninjak working for British intelligence service MI-6 and posing as a wealthy businessman looking to hire a Sumu-sized gang lord to build  some high-tech armaments. King hopes to infiltrate himself into the camp of Kannon, arms-maker-for-hire and one of the leaders of Weaponeer.  Ninjak must investigate while a guest of Kannon a 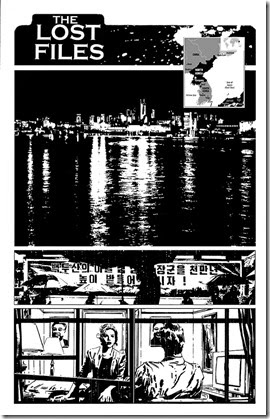 nd spy around to determine who the other leaders of Weaponeer may be, all under the watchful eye of Kannon’s assistant Roku, the same bad-ass Russian ninja that was broken out of jail by Ninjak earlier in the story.

Clay Mann and Butch Guice on art in the same issue?  What a bonus!  This oversized 33 page debut issue contains a back-up feature, LOST FILES featuring further glimpses into the checkered past of Colin King/Ninjak.

The back-up story takes place 10 years ago, when King was a new recruit on his first assignment in North Korea. The task seems simple enough, but timing has a way of complicating matters, and it does here.  Young recruit King proves to be just slightly better as a spy than he is a fighter. In summary, he has a long way to go.

Since his current debut as a guest in various other Valiant titles (Unity, X-O Manowar, etc) the modern version of Ninjak reveals him to be more skilled in weaponry, surveillance, and espionage than ever before as well as a more complex and intriguing character than previous versions. In the capable hands of Kindt, there is more great reading to look forward to.

Kindt’s version of Ninjak is the third one in print, following the original Valiant title in the 1990’s and then the short-lived Acclaim version.  Kindt’s Ninjak is far clo 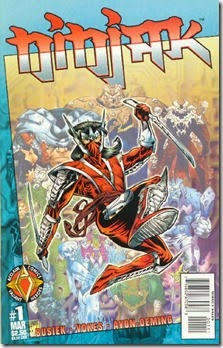 ser to the original, although there are already several indications that he is changing things around and putting his own imprint on the character.  I doubt that he will borrow anything from the second version.  It featured strong story and art, but Acclaim changed Ninjak into a teenager who became powered by a video game and then spent his time in battle with twelve different monster bosses, all from the video game and transferring over to the real world.   The second version has a special place in history as well as my own favorite comics memories.  It featured two of my favorite creators, with Kurt Busiek on script and Neil Vokes on art.  It also debuted in 1996, the year that my son learned how to read through the magic of comics, eventually developing a vocabulary three years ahead of his age group.  Acclaim’s Ninjak was one of his favorite reads.

The original version of Ninjak was developed by the creative team of writer Matt Moretti and artist Joe Quesada.  It quickly became one of the most popular series from the original team at Valiant.  Issue #1 featured a chromium cover and ended up selling over one million copies. 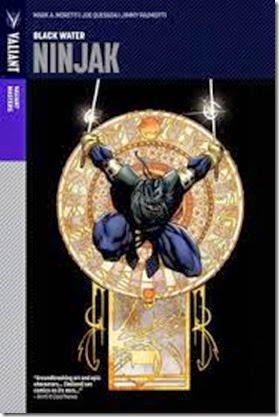 Then as now, British playboy Colin King is Ninjak.  He possesses no super-powers, but through training he is highly skilled in various martial arts, swords and various weaponry, and has a genius level intellect that allows him to anticipate and counter move his opponents.  King grew up in the Orient, and was the son of a British master spy. When his father is killed, Colin King goes into serious training and becomes a master of the ninja arts.   I do not recall the first version containing a  manipulative and punishing manservant that Kindt alludes to in the background /history panels.

Ninjak in the first version is a member of the Weaponeer organization and acts as their enforcer.  In the new version, Ninjak takes free lance assignments from MI-6, and one of those missions is to determine the leadership of Weaponeer by infiltrating the organization.

I look forward to enjoying the new direction under Kindt and Mann, with great background stories by Kindt and Guice.  At 33 pages, this is a great monthly addition.