Despite outward appearances and a reputation for dark and gritty crime fiction, you won’t find a nicer, more amiable person in Philadelphia than author Duane Swierczynski.  He visited The Comic Book Shop in Wilmington, Delaware on Sunday afternoon March 8 to sign copies of THE BLACK HOOD from Archie Comics as well as hardback editions of his latest crime novel CANARY. In between the signings he took time to chat with fans and readers of his works, willing to discuss a variety of topics from comics to crime novels, television shows, and the craft of writing.  He had some particularly good advice and words of wisdom to share with this aspiring fiction writer and blogger. 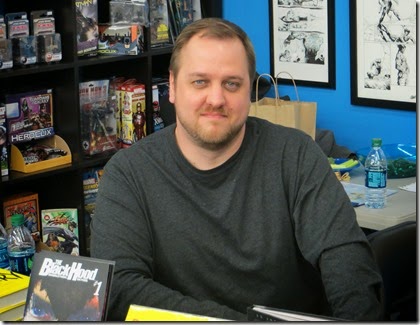 THE BLACK HOOD is the flagship title in Archie’s venture into more mature markets with it’s Dark Circle imprint.  THE BLACK HOOD is definitely worthy of that honor, being the story of a Philadelphia police officer who regrets a decision that left him disfigured and also guilty of downing an innocent man.  He turns to vigilantism on the dark streets of Philadelphia.  It’s both gritty and realistic - -  and a much different take on this genre than his bloody, violent work on X for Dark Horse Comics.

Speaking of X and his other current work in comics, Swierczynski is at a transition point.  Several of these titles are ending, and he’s hard at work on new creations.  X will wrap up with Issue #24 (due in April).  With sales tapering off, Dark Horse has decided to suspend publication of X for the time being, leaving open the possibility of a return as a limited series or several mini-series.  Swierczynski does have a new project in the works for Dark Horse, of which he’s not at liberty to discuss.

He’s still writing JUDGE DREDD for IDW. That title will conclude at Issue #30. Swierczynski says he’s grateful that it ran as long as it did, considering many other new works don’t make their one year anniversary.  He also feels that he’s told the stories of Judge Dredd that he wanted to tell; and there might be some more work in his future with IDW.

As for THE BLACK HOOD, the first story arc concludes in Issue #5.  The next five-issue story arc is in discussion with the editorial department at Archie Comics, although his contract does not specify a fixed number of issues and is wide open to continue indefinitely as a  monthly title.

Finally, he’s hard at work on a creator-owned property for Fall 2015 publication. All he can share right now is that it’s a crime comic done for a known publisher who will be creating a new imprint.

On the crime fiction side, CANARY is his ninth novel.  He’s now writing on average one novel per year. Novel #10 was just turned in to an editor - - REVOLVER – expected to debut in 2016. 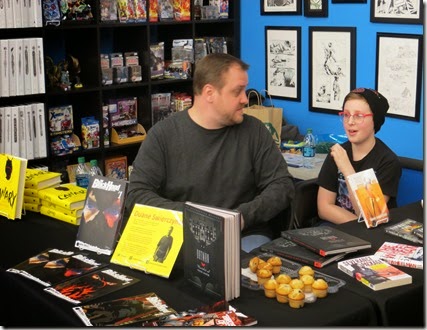 Photo at left: Swierczynski confers with his young son, a newly promoted sales assistant as they debate some marketing plans and strategy.  The mini-muffins have served well as a magnet to draw in hungry readers.

Swierczynski has been reading comics since childhood, with a short break. His favorite reads are crime and horror comics, which he started reading when books cost only 25 cents and could be picked up at a local newsstand.  He especially remembers one of his first prized treasures – a copy of Marvel’s WEREWOLF BY NIGHT that came in a special edition with a 45 rpm vinyl record.  He stopped reading comics after college, and came back to them in 2000. Neil Gaiman’s SANDMAN got him interested in comics all over again, and a stop each Wednesday to a comic  store has become part of his weekly routine.

He’s currently a fan of the recently released BIG MAN PLANS from Eric Powell and cites HIT by Bryce Carlson and 100 BULLETS by Brian Azzarello as among his favorite works.