EDITOR’ NOTES:  Noted comics and fiction author Duane Swierczynski will be signing both THE BLACK HOOD from Archie Comics as well as his latest novel, CANARY, at THE COMIC BOOK SHOP at 1855 Marsh Road in Wilmington, DE on Sunday, March 8 from 12-3 p.m.  I greatly enjoyed his work on BLOODSHOT and HARBINGER WARS for Valiant and those reviews can be found in our 2014 and 2013 archives. As a public service to our readers, we explore some of his later works here . . . . . . . . 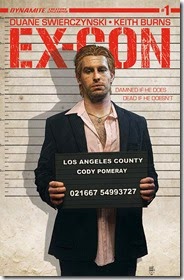 In contrast to his work on X at Dark Horse Comics, EX-CON is a straightforward crime story.  Sure, there are some gun fights and fisticuffs and brawls.  But they seem relatively mild by comparison to the blood, brutality, mutilation, severed limbs and mayhem of X.  However, EX-CON has some steamy sex scenes suggestively illustrated by Ken Burns, who does a competent job on art.  Good crime comics don’t seem to have flashy art.  There are some exceptions of course (SIN CITY, for example) but usually story trumps art.  EX-CON is definitely about the story and there are many characters of different stripes. This seems closer to the type of crime fiction that Swierczynski specializes in.  It’s a complete story that ends in five issues. While a lot of Swierczynski’s fiction takes place in his hometown of Philadelphia, EX-CON is set in California - - Malibu, Venice Beach, and San Quentin Prison.  What also makes it a little different from his other crime stories is the introduction of a fantasy element.  It’s not enough to deter from the standard crime themes, though. It’s just something that is introduced and made to seem believable and somewhat realistic, and serves as a plot point. 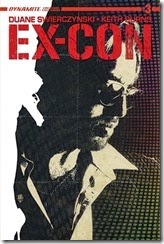 omeroy (fake name) is a con-man with a special gift.  He can visualize a band of colored light surrounding a person’s head like a halo.  Like a human lie detector, by reading the colors Cody can tell when a person is lying or being honest.  He can detect greed, lust, fear, and weakness depending on the color he sees.  With a very attractive girlfriend to help him find victims, he does very well for himself.  Until the day he picks an influential kingpin as his mark and gets himself arrested.

Shortly after his arrival at San Quentin Prison, Cody gets severely beaten up by a prison gang, just another inside job by thugs for hire or working off a debt. Only by the intercession of a former kingpin (who now resides in prison) does Cody remain alive.  A consequence of his beat-down is the loss of his aura-reading ability. 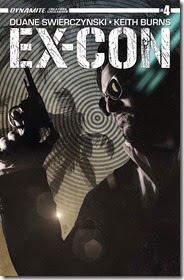 Upon his release five years later, the kingpin who saved his life calls in the debt. He wants Cody to use his special human lie detector ability to identify an arsonist (possibly an inside man) who trashes every property after a crooked property manager acquires them.  Cody hasn’t shared with anyone that he’s lost that ability, and has to resort to old-fashioned detection methods, with a little breaking and entering thrown in for good measure.  Without his abilities Cody also can’t determine which of his associates (including that former girlfriend) is being perfectly honest with him.  Because this is the 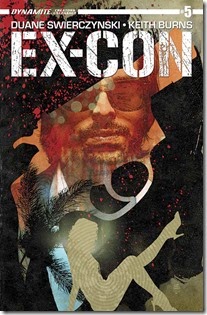 criminal world, there are plenty of double-crosses and side actions going on.  Even his parole officer is suspect.

Even though Cody is not the most honorable person he may be the most sympathetic of the bunch of characters moving around and manipulating behind the scenes in this story. While some of that ability returns to him, it also can let him down at crucial moments. Otherwise the story probably wouldn’t take five issues to tell.

There’s plenty of mystery and suspense here to hold the reader’s attention, with a nice dash of mild violence and sex to spice things up.  If you enjoy crime comics or crime fiction you won’t be disappointed by EX-CON.