What’s New This Week? = A Supernatural Mystery with Superheroes

EDITOR’S NOTES:   For some time now, I’ve felt that I should explain why the 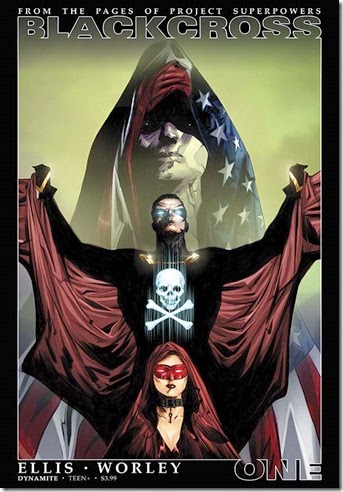 Warren Ellis is one of those creators that I attempt to follow.  If he dabbles in the superhero melting pot, I’ll always give it a taste.  However, that doesn’t always guarantee a good read.  I think it depends on whether he is filling in on a title (for example, his short and unmemorable run on Marvel’s SECRET AVENGERS some years ago) or being given more creative freedom in the case of a character re-boot  (see his imaginative first story arc on the most recent reincarnation of Marvel’s MOON KNIGHT).  Now, he’s dipping into the blend of lesser-known characters (many now in public domain) from Dynamite’s PROJECT SUPERPOWERS.  This was a popular limited series from 2008 that resurrected many Golden Age superheroes from the smaller publishers like Fox, Crestwood and Nedor.  One of the better-known characters from that series was The Green Lama (wouldn’t I love to see Ellis tackle him?)

After just one issue, it’s very hard to tell where the story in PROJECT SUPERPOWERS BLACKCROSS is going.  Readers may wonder which of the characters from the aforementioned limited series will be included in this new work. (My second chance to nominate The Green Lama! Please?)  While the covers (six different ones) are all very enticing and feature superheroes on them (with one exception, the fire on the water cover) readers may anticipate more of the same inside the pages. There are only a few panels where superheroes appear in Issue #1.   The word “Blackcross” also would seem to indicate that this is the name of a character, perhaps the one portrayed on the fabulous symbolic main cover by Jae 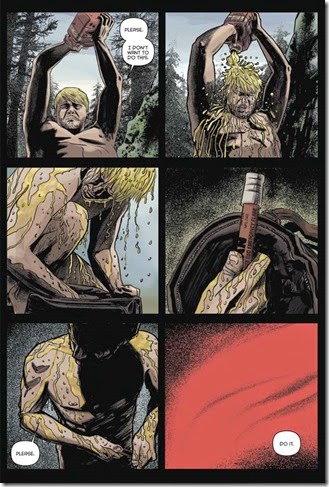 Lee and Ivan Nunes. That is an image of Black Terror, a prominent hero from PROJECT SUPERPOWERS.  Yet, he appears as a foggy image in just one panel in the first issue, unless he is out of costume and not identified.  Blackcross actually happens to be the name of the town in Washington State where the story occurs.

What does play out in Issue #1 are some very strange and sometimes disturbing incidents that occur without explanation, baffle the police and investigators, and set the stage for future events.  A mystery is being developed with undertones of supernatural forces at work.  The only common element is that everything happens in the little town of Blackcross.

Criminal investigators that are trailing a serial killer who leaves patriotic carvings in his victim’s chests learn that his next stop is in Blackcross.

A mirror may be the gateway between the psychic/medium dubbed Lady Satan (what a choice for a business name!) and a masked and caped image that appears to her, looking for a pathway and beseeching her to reach out and touch.

Or, are these incidents just part of the nightmares that cause sleepless nights for a man with an identity crisis, in a witness protection program and struggling to adjust while he begins to receive threatening messages via email?

Will all these loose threads tie together to knot up a satisfying thriller?  I would assume so, as this is some bait that I intend to nibble on.  I’m hooked. .