Do you enjoy your space opera spiced with a little politics and revolution?  Then INVISIBLE REPUBLIC may be your escapist ticket to ride. 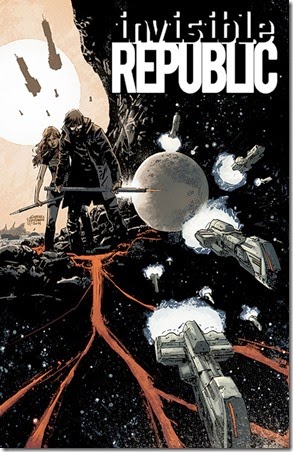 The year is 2843. Thanks to faster than light travel, human civilization has expanded to many planets across the galaxies.  Avalon, a small moon, has recently experienced economic collapse due to the failure of the Malory Regime to maintain power and influence. With no government services or police force, things deteriorate rapidly.  Most citizens, looking for better opportunities, opt to leave via crowded off-world transport. Commonwealth soldiers (of the Republic?) patrol the planet, mainly to ensure an orderly departure and enforce the curfew.

Croger Babb, a news reporter who apparently has seen better days, tries to question the remaining residents and gather some opinions through ‘man in the street’ interviews. While attempting conversation with a ragtag improvised food vendor, Babb spots some unusual papers being used as fuel for the tramp’s fire.  He recovers a manuscript that turns out to be a diary detailing an historic encounter forty years prior.

These handwritten pages turn out to be significant, as they provide a previously unknown background into the early days of the recently deposed dictator.  This is the set-up for future issues of INVISIBLE REPUBLIC.  The personal journal of Maia Reveron, which Croger Babb will try to market as a press exclusive, reveals some earlier times with her cousin Arthur McBride (who later became the dictator).  The diary notes with great detail (and amazing fight scenes as illustrated by Hardman) the disturbing violent tendencies of her cousin.

While reminiscent of several familiar stories of disintegrating society (BLADE RUNNER and 1984 among them, mainly for the scenes of weathered and desolate streets) I’m reminded most of the classic TRANSMETROPOLITAN Vertigo series (which also makes me very hopeful for INVISIBLE REPUBLIC’s potential).  However, with just one issue in of what looks to be an epic, it’s hard to determine if Babb is the main character or just a foil for introduction purposes.

Co-creator Gabriel Hardman calls INVISIBLE REPUBLIC a “political sci-fi conspiracy thriller” and Issue #1 provides plenty to support the first half of that description.  Along with co-creator (and wife) Corinna Bechko they paint a portrait of a despondent society in transition.

Any opportunity to view the dynamic art style of Hardman once more is a very welcome opportunity.  I’m been a fan of his work since Boom’s PLANET OF THE APES and DEATHMATCH series.

In early press releases, INVISIBLE REPUBLIC has been described as “Breaking Bad meets Blade Runner” like a Hollywood movie pitch always refers to other works.  I’m not sure that is a very accurate description, but it does get attention. Whether or not INVISIBLE REPUBLIC resembles either of those works remains to be seen. It’s too early to tell.  BLADE RUNNER at it’s root was a  speculation on artificial intelligence, posing the question  - will we be able to distinguish humans from life-like computers in the future?  As mentioned earlier in this review -  the barren, deteriorated planet in INVISIBLE REPUBLIC will remind some of the city back-drops in BLADE RUNNER.  At the root of BREAKING BAD is the story of a noble man corrupted by power, as season after season detailed his progression into darkness.  I could see how INVISIBLE REPUBLIC may follow that same path, as the found diary details the early life of the deposed dictator and may chronicle his ascension into political power and later descent into exile.

The back pages content of INVISIBLE REPUBLIC provides a glimpse at the script and art process in progress and how they mesh, as well as profiles of all creative team members.

I would hazard a guess that comic shop initial orders were on the light side for INVISIBLE REPUBLIC. So, if you are interested and want to insure that you get a copy of Issue #1, contact your local comics store now and ask them to hold a copy for you.  Otherwise, the shelves could be empty by the time you arrive there. If you are a fan of well-developed science fiction, then I urge you to do so.