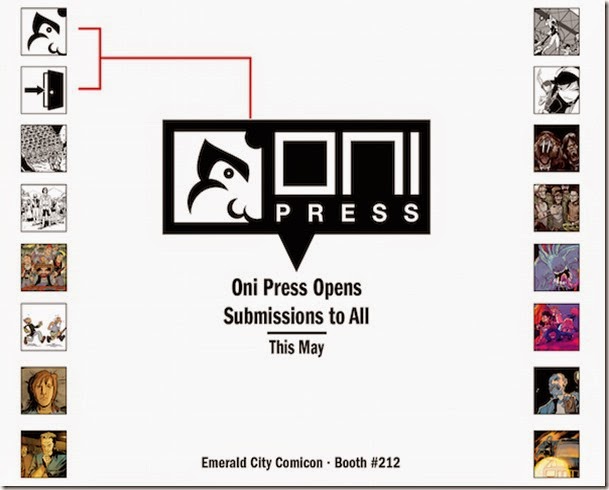 PORTLAND, OR March 19th, 2015 - Oni Press, Portland’s premier independent comic book publisher, announced today they will begin accepting submissions and pitches in May. Under this policy all writers, artists, cartoonists, and colorists seeking to publish their work with Oni Press will be able to submit their portfolio to the Oni Press editorial team.

Oni Press will accept submissions electronically through email.  Creators whose submissions are selected for follow up will be contacted within a designated length of time. Further specific details on the process and where to submit will be released this May.

"We are on the hunt for new stories from new creators, featuring characters that reflect the diversity of the world around us," added Editor-in-Chief James Lucas Jones.  "Oni Press has always valued content and execution, and we are looking for creators and projects that can support our goal to publish excellent, varied, and original work."

About Oni Press
Oni Press has been Portland’s premier indie comic book publisher since 1997.  Home to a range of rad comics including Scott Pilgrim, The Sixth Gun, Invader Zim, Rick and Morty, Stumptown, Princess Ugg, Letter 44 and The Bunker, Oni Press strives to create comics for you.