EDITOR’S NOTE: After a somewhat rocky start, the current version (reboot) of Quantum and Woody has hits it stride, with the most recent issues realizing the perfect blend of comic book super-heroics and comedy/satire.  Interest is already building for THE DELINQUENTS, debuting in August, which features Quantum and Woody in a team-up/cross-over mini-series with Archer and Armstrong. Can the original creative team top the young upstarts?   This new series should be worth a look . . .

The most demanded return in comics finally arrives this October! 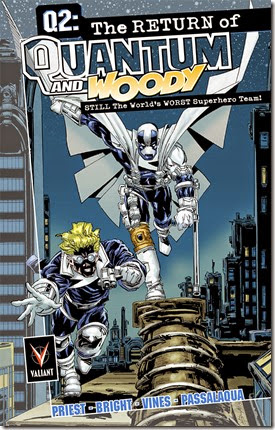 Valiant is proud to announce the release of Q2: THE RETURN OF QUANTUM AND WOODY #1 (of 5) on October 15th – the FIRST ISSUE of an all-new new mini-series reuniting legendary creators Christopher Priest (Black Panther, Deadpool) and M.D. Bright (Green Lantern, Iron Man) with the world's worst superhero team!
Set in the original series continuity, 20 years on from Quantum and Woody's last adventure, Q2 marks the beginning of an all-new chapter for one of the most acclaimed series and creative teams of the last two decades.
"As a longtime Quantum and Woody fan, this project is a dream come true, as is diving into the material and working with these amazingly talented creators," said series editor Alejandro Arbona.  "Getting in all-new scripts and all-new art of the new adventures of Eric Henderson and Woody Van Chelton is surreal. Quantum and Woody are back!"
Whatever happened to the world’s worst superhero team?  Twenty years past their prime, the unlikely crime-fighting duo known as Quantum and Woody (not a couple) have long since parted ways…until a middle-aged Quantum suddenly reappears with a brand-new teenage partner.  Now Woody is out to break up the all-new, all-different Quantum and Woody and put an end to Quantum’s recklessness…just as Quantum takes on a life-or-death personal mission for national security.  Can these former friends set aside their differences…and their age…and their numerous health difficulties…to join forces one last time without driving each other crazy?
Find out when the world's worst superhero team strikes back on October 15th in Q2: THE RETURN OF QUANTUM AND WOODY #1 (of 5)! 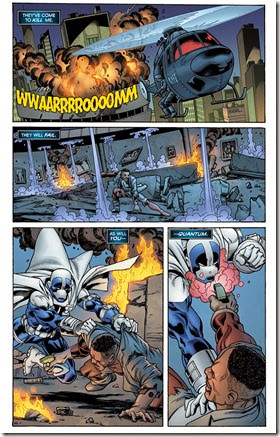 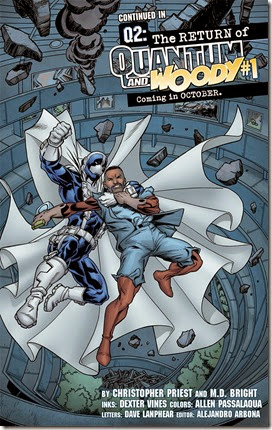 Also hitting stores alongside Q2's first issue on October 15th, Priest and Bright's seminal run on Quantum and Woody's original series will be collected in its entirety for the first time anywhere in THE COMPLETE QUANTUM AND WOODY CLASSIC OMNIBUS!
The first in a new line of oversized hardcover omnibuses re-presenting the most demanded series and runs from the Valiant archives, THE COMPLETE QUANTUM AND WOODY CLASSIC OMNIBUS hardcover will collect QUANTUM AND WOODY (1997) #0–21 and #32, THE GOAT: H.A.E.D.U.S. #1, and X-O MANOWAR (1996) #16 (guest-starring Quantum and Woody), the original backup stories from the QUANTUM AND WOODY trade paperback collections, and the never-before-collected story "Thunk" – plus a wealth of rarely seen sketches, character design, process art and promotional materials! 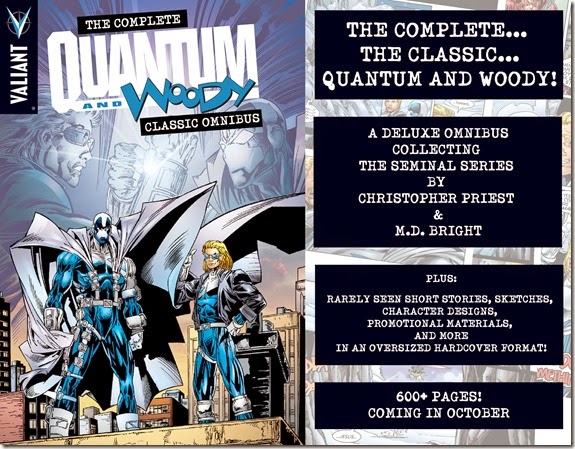