Catching up and cracking up with THE AUTEUR

The madcap parody of Hollywood (and to a lesser degree. modern society) that is THE AUTEUR continues in sarcastic fashion with Issues #3 and #4, leading up to the Issue #5 conclusion of the first story arc (more, perhaps?  . . . Please?) entitled “President’s Day”  (not in honor of the holiday, but the name of director/producer Nathan Rex 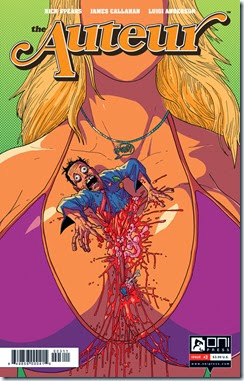 ’s latest exploitation movie).   As with previous issues, this is intended for mature adult audiences (just the ones that read comics, mind you) and comes with the contents page disclaimer: “The shocking scenes you are about to see are not suggested for the weak or immature.:”  (Who’s left after that?)

Writer Rick Spears is sick, in a good way.  The script he brings up and spews out is like a breath of fresh air to those readers used to more semi-serious but still fantastic fare.  THE AUTEUR is grounded in reality (no super-heroics here) but it’s a reality as shocking as the real world can be  - - as long as it’s viewed through hazily tinted shades hiding bloodshot, hallucinogenic eyes.  Not since Fear And Loathing In Las Vegas has there been a tale as paranoid, weird and wacky as THE AUTEUR.  The art team of Callahan and Anderson is a perfect choice to illustrate and color this frantic fable.  The style will remind of classic MAD magazine (when it was an EC comic) and the wonderfully creative Little Annie Fannie  (a parody of Little Orphan Annie that ran for many years in PLAYBOY magazine).

Having served as self-appointed defense for a serial killer in Issue #2, desperate producer Nathan Rex hires the bloody murderer as a special consultant to the “President’s Day” film.  In Issue #3, crazed killer Darwin decides to stand in for the actor wearing the President Lincoln mask and costume and takes method acting far too seriously.    Prior to this the opening pages feature an audition for the female lead portrayed in titillating fashion.  True to form (this is an exploitation flick, after all), it’s an audition of breasts (panel after panel, oh my). 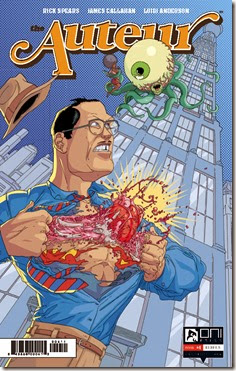 After the action scene becomes too raw and realistic, Nathan takes Darwin aside and gives him some pointers : “No more killing the cast!  If you must, keep it to critics, and agents, and anyone in development.”  A disappointed Darwin makes a side trip to the beach and takes out his frustration on a school of sharks. (Hard to tell the difference between them and Hollywood agents, I suppose).

Here’s another funny line / sequence:  Nathan then gets his sights on the attractive woman (Madame Coconut) that  he spotted (and dreamed about) from Issue #1.  As he tries to recruit her to replace the leading lady (and also charm her into sleeping with him) he introduces himself: “Nathan Rex.  I’m in pictures.”  The response:  “Coconut.  I fall from 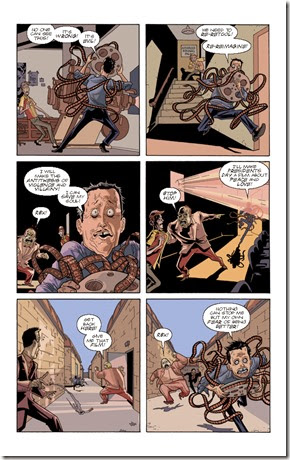 Despite the developer’s keen interest in the film after viewing the dailies with new director Rex, Nathan has a change of heart and decides to turn “President’s Day” into a modern romance.  He attempts to transform the script based on his own lust-filled desires and motivations.  Of course, nothing can describe his heartfelt emotions like a great on-screen explosion.  (He’s also hoping that at the appropriate moment, this could be meant to seem like the earth just moved for the object of his affections.) However, there is a bit too much in the stunt, and the earth actually moves.

How he will overcome this latest setback to the production is anybody’s guess.  The answers (and surprises, I’m sure) await us in the forthcoming last chapter in Issue #5.

In addition to a great story and art, the covers to THE AUTEUR have been very expressive.  Both Issue #3 and #4 pay homage to the classic chest –burster from the ALIEN  films.  If you can’t be bothered to pick this up monthly, at least pick up the eventual trade paperback!