DYNAMITE is bursting with an explosion of new books

EDITOR’S NOTES:  DYNAMITE ENTERTAINMENT has been very busy in 2014 acquiring comic book rights to various licensed properties, and expanding their selection of creator-owned titles.  We are going to post announcements of some of those titles here, in the belief that our readership has an interest in looking beyond the Big Two publishers for their entertainment. 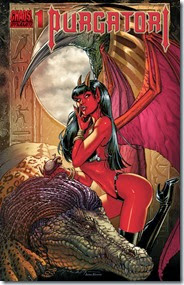 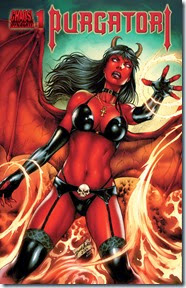 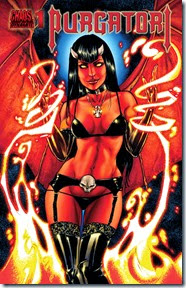 June 16th, 2014, Mt. Laurel, NJ: Spinning out of Dynamite's best-selling Chaos! Universe, Purgatori  flies like a bat out of hell - a vampire bat that is - into the pages of her own ongoing series.  Join scribe Aaron Gillespie and artist Javier Garcia Miranda for Purgatori's fiery return to her own monthly title.  Featuring covers by a vast array of comic book greats; Nei Ruffino, Joyce Chin, José Luís, Tony Fleecs and Tim Seeley.  Purgatori #1 explodes onto comic shop shelves and digital devices this September.
In Purgatori #1, trapped in hell, the bitch-queen learns that the Devil doesn't play games.  Can she outwit Lucifer or will he make her regret the day she crossed him?

"As a teenage metal head, I was instantly drawn to the first Chaos line," says writer Aaron Gillespie.  "They were dangerous and alluring and I was sure that my mom would take them away if she ever found them.  Just too many blood splatters and scantily clad ladies for her taste.  But that just made me want them even more!  Of all the characters, Purgatori was my hands-down favorite.  So getting a chance to work on this new version has been a real dream come true.  I'm having a blast updating the character and promise to keep the same balls to the wall, take no prisoners storytelling that made Chaos what it was.  And if you're new to this crazy universe, I can promise it won't take you long to get hooked on the vampire goddess!"

"As we continue to grow the Chaos! Universe, we wanted to work with a writer who not only knew the Chaos! Characters as they had been, but also help us to evolve them and take them to the next level.  Aaron not only has a great understanding of the characters, but when he reviewed our bible for the universe, and where the Chaos! mini-series was going, he presented us with a pitch that showed that he "got it", and we couldn't be happier"  states Dynamite CEO/Publisher Nick Barrucci.

Purgatori #1 will be solicited in Diamond Comic Distributors'  July Previews catalog, and slated for release in September 2014.   Purgatori #1 will also be available for individual customer purchase through digital platforms courtesy of Comixology, iVerse, and Dark Horse Digital. 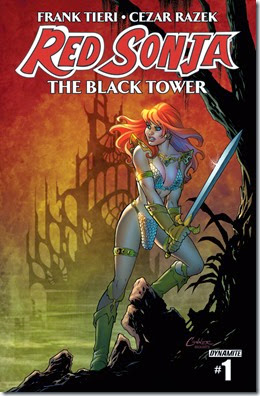 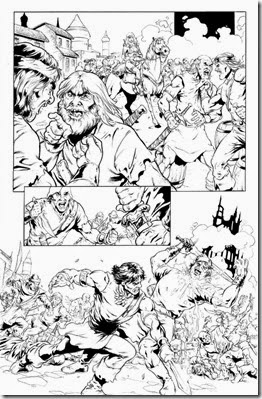 In Red Sonja: The Black Tower #1, the question is posed; what is the Black Tower?  What startling mysteries does it contain within its walls?  And most shockingly...how will its very existence cause the death of Red Sonja?!

"Simply put, THE BLACK TOWER is an old fashioned mystery-and as we all know, everybody loves a mystery," says writer Frank Tieri.  "In fact, I'd say at times, this story is more in line with a Stephen King story than your typical Sonja tale.  The Tower just appears out of nowhere one day-nobody knows why, nobody knows how.  People are scared, they're confused-and they start turning on each other.  That's when Red Sonja enters the picture.  And what she finds is mystery that will span decades, which will pit people against each other, that will cost many lives… including her own.  Now, I think that's a story fans will want to see how it turns out, don't you?  I like that she's this total bad ass-that she's the WOLVERINE of her world, that she's The Man With No Name-- but she's also a woman. Because you don't often see that.  You don't often see it being a woman that walks into a bar and everybody tenses up, everybody pees their pants.  And in Sonja's case, if you underestimate her, if you just dismiss her as ‘just a woman'-she's going to make you pay for it. And then some."

"Gail Simone's Red Sonja series has received so many accolades, we have been very selective about our Red Sonja series or specials," adds Dynamite CEO / Publisher Nick Barrucci.  "But when Frank pitched this mini-series to me, I knew that this would be a perfect stand-alone mini-series. And having Amanda on covers is icing on the cake!" 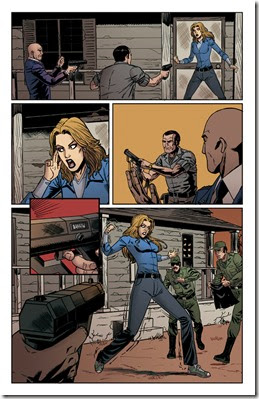 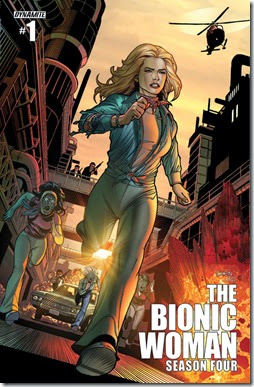 In Bionic Woman: Season Four #1, Jaime is trying to balance the hope of a normal life with that of a government agent...but when you work for the O.S.I., even a routine mission to Mexico can prove to be far more dangerous than anyone expected.

"If you've never seen the show, or haven't read James Kuhoric's Six Million Dollar Man comic, you're still totally fine," says writer Brandon Jerwa.  "Longtime fans won't be left out in the cold, though. The Bionic Woman: Season Four is a continuation of the classic TV series, so I'm definitely treating it as such in terms of continuity and thematic carry-through."