It would be much too simple to categorize this new title as a fantasy adventure appealing to young teenage girls who love to dream of princesses.   PRINCESS UGG has been described elsewhere as an “all-ages Viking comic adventure.”   That also seems a bit short-sighted.   I’m favoring the description that is contained in the afterword text piece in Issue #1 = “ a barbarian who attends a school for princesses.”  Those who are familiar with the previous work of creator Ted Naifeh, in particular Courtney Crumin, can expect another whimsical and engaging adventure book that will find all sorts and types of readers among its soon-to-be growing audience. 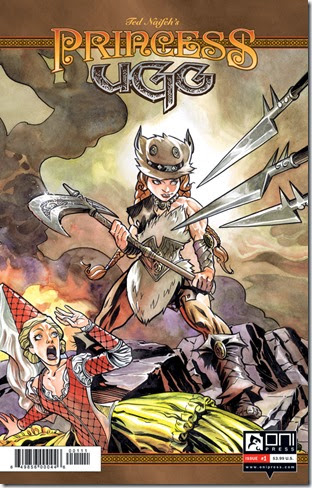 Princess Ulga of Grimmeria lives high in the mountains of a fantasy world where the five kingdoms have made their peace with each other, yet the dwellers on the outskirts continue to feud and battle.  It’s hard to place the exact country that Grimmeria emulates because of the Norse-like appearance of the characters that contrasts with their dialect, which seems to be of Scottish origins.  Ulga’s father resembles Odin and is called by that name, among others.

The wintry world of Grimmeria lies far above the luxurious kingdom of Atraseca, where young Ulga must journey to attend a Princess Academy.   Dressed in woolen clothing and never far from her axe and sword, Ulga seems the least likely to be desirous of a feminine education.  She rides into Atraseca on her intuitive wooly mammoth, and proceeds to give the militia of the town a lesson of her own.  There is a good amount of humor to accompany the action.  Ulga is a handful - -  a very independent, headstrong, and aggressive young woman - - part Red Sonja and all attitude.

Naifeh’s art style is subtle. It looks cartoonish until you study it a little more and see the detail that he brings to the panels. His style is also very fluid and the action scenes incorporate great movement. The coloring really enhances his work and adds a lot of vibrancy to the story.  This is one to check out.