BATMAN: EARTH ONE
Writer:  Geoff Johns
Artist: Gary Frank
DC Comics | Hard Cover | $22.99
Review by From the Booth‘s own Ken
The Earth One line of books is an opportunity for DC’s best writers and artists to re-imagine and update classic characters free of continuity. Although we can be forgiven for confusing Earth One with the New 52, the All-Star imprint, virtually of the post-Crisis Events, and several other books reviewed here such as Waid’s Superman: Birthright; the Earth One titles seem to stand above these others in that they are not afraid to do more than just slightly tweak a character’s origin.
This isn’t the Batman you know. The smooth operator whose body is toned to the height of human perfection and who is aided by his collection of amazing gadgets is replaced here with an angry young man lashing out at the world. He has the motivation but lacks most of the training. He stumbles through the story with the help of his support staff and blind luck, most of his growth into the role left presumably for a later volume.
The story opens with Alfred Pennyworth, an old war buddy of Thomas Wayne’s and an implied mercenary, arriving at the Wayne household. He has been summoned by his friend to act as his head of security while he runs for mayor. Sadly before Alfred can settle into the job, the Waynes go the theater and the hit that every reader is waiting for comes. As Alfred mourns the loss of Gotham’s most famous couple, he learns that he has been named as the boy’s guardian. 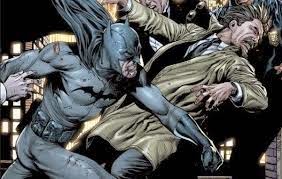 In both writing and art, this book is an improvement on the only other comic to be published in the same line, the #1 New York Times best selling Superman: Earth One. Geoff Johns’ take on Alfred is unprecedented and brilliant, and tying in disparate threads into Batman’s origin such as making his mother an Arkham sheds new light on Bruce’s motivation. Even such iconic scenes as the bat breaking through Bruce’s window or Bruce falling into a cave of bats are rewritten to have an impact on readers jaded by the same story being retold every few years.
The art is beautiful and Batman’s character model succeeds in being a stripped down version of the costume that you can still appreciate. Simple but elegant touches like significantly filling in Alfred’s usually gaunt face shatter convention and help differentiate this book from the many other interpretations of Batman’s origin.
Final rating (out of 5):