EDITOR’S NOTE:  BC Refugees has great respect for classic pulp fiction and admires any attempt to revive this format, which embraces or enfolds many genres: action adventure, detective, crime, science fiction, fantasy, horror, mystery and western.  From their home base in Arkansas, since 2010 Pro Se Press has done much to keep the format alive.  We feel honored to share the news of their latest and very ambitious plans.  We plan to update our readers on happenings at Pro Se on a regular basis . . . . . . 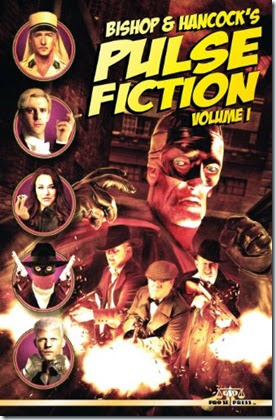 Pro Se Productions proudly announces the release of the first volume in a new series two years in the making.  Want stories that will get your heart racing, your blood pumping?  You’ll find them in Bishop and Hancock’s Pulse Fiction Volume One, available now from Pro Se Productions.  Pulse Fiction takes the best of the past and shakes and stirs it with today’s finest Genre Fiction writers.  Encounter a cast of characters created by Bishop and Hancock and written into four color, over the top life by Eric Beetner, Barry Reese, D. Alan Lewis, Brian Drake, James Hopwood, and Hancock.  Just like the bygone magazines of the past, Pulse Fiction brings rich, vibrant characters embroiled in death defying adventure to readers, characters that will return in later volumes crafted by these and a whole myriad of other authors.

“This,” says Hancock, “is not simply a homage to the classic Pulp tradition or those digests from the 1950s and 60s.  Although these stories are definitely ‘pulpy’ in every sense of the word, they also ring with a modern resonance and relevance.  These tales are certainly products of the past as well as the present and the authors we’ve gathered blend the two effortlessly.”

Bishop And Hancock’s Pulse Fiction Volume One is available in print at Amazon and through the Pro Se Store at http://tinyurl.com/n2jyob2 and features a fantastic cover by Jeff Hayes with cover design and print formatting by Percival Constantine for only $12.00. The collection is also available for $2.99 as an E-book formatted and designed by Russ Anderson on Amazon, Barnes & Noble, and www.smashwords.com 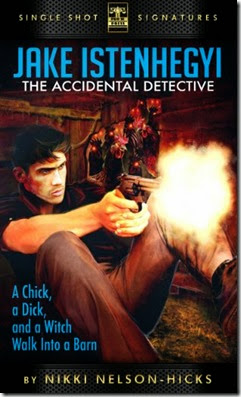 Pro Se Productions proudly announces the debut of the first series in its highly anticipated Pro Se Single Shot Signature line of digital singles.  Mystery, magic, and madness come together explosively in author Nikki Nelson Hicks’  A CHICK, A DICK, AND A WITCH WALK INTO A BARN, the first tale in Hicks’ Jake Istenhegyi, the Accidental Detective series.

When Jake Istenhegyi inherited a used bookstore in New Orleans, he thought he had finally found a haven.  Thousands of miles away from the political unrest in Budapest as well as his mother’s gypsy clan that had hounded him since he was a boy.  Here, he could hide away and spend his days reading and drinking coffee in peace and quiet.  The American Dream come true, right?

Then he rented out a room to Barrington “Bear” Gunn, WWI vet and aspiring gumshoe who dreamed of living the life of his pulp heroes, Spade and Marlowe.  Bear bartered his services to people in very low places and, in the end, pulled Jake down with him, enrolling him in a business that never goes out of business: fighting evil.

A CHICK, A DICK, AND A WITCH WALK INTO A BARN is the first in Hicks’ Pro Se Single Shot Signature Series featuring her original character, Jake Istenhegyi, The Accidental Detective.  With cover and logo design by Jeff Hayes and E-bookk design and formatting by Russ Anderson, the book is available for 99 cents at Amazon, Barnes & Noble, www.smashwords.com, and other ebook outlets.

Always striving to provide more of the best in Genre Fiction and New Pulp for you, Pro Se Productions has a continual list of anthologies and imprints open for writers to submit to.  We like to call it The Pro Se Open.  If you’re a writer interested in the possibility
of writing for Pro Se, check the Writers Wanted section (http://prose-press.com/pro-se-open/) regularly to see if projects are still available and to keep up with all the new concepts open for submission from Pro Se Productions.

Stories must be 10,000 words in length.  A proposal of 100-500 words must be submitted to submissions@prose-press.com.  Authors not previously published by Pro Se Productions must submit a writing sample of at least two pages with their proposals.
Authors whose proposals are accepted must submit the first four pages of their accepted stories as quickly as possible for review by Pro Se staff.  Final deadline for completed stories is 90 days following acceptance of proposals.  For more information on the
submission process, go to http://prose-press.com/pro-se-open/.

ORIGINS & ENDINGS
Pro Se Productions announces an open call for submissions to a uniquely themed anthology-Origins & Endings.
It will contain an equal number of first stories and last stories. The tales must be ‘Pulp’, in that they should be well paced plot driven tales with larger than
life characters.  Stories must either be the first adventure of the character or the final story of the character the author chooses to use. Characters can either be original and introduced in this anthology or they can be the proposing author’s existing characters already
published elsewhere.  If using an already established character, the story written for this volume must be original to this work, no reprints or shallow rewrites of already existing stories allowed.  Also, the stories in this volume will not be flashbacks, but the actual first
or last escapades of the character involved.
Origins & Endings is scheduled for publication in mid to late 2015 by Pro Se Productions.