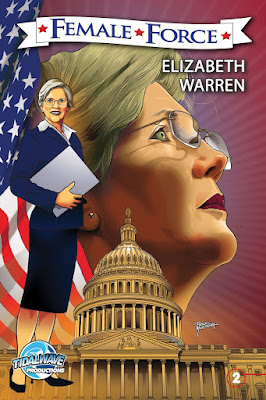 The successful comic book issue detailing Elizabeth Warren’s life and career will be getting a sequel of sorts this week. The book will pick up from the 2016 female empowerment comic book series “Female Force: Elizabeth Warren” and will detail more of her background and political acumen.

From modest means to the Massachusetts Senate, Elizabeth Warren has proven herself a powerful advocate for the middle class. Her plainspoken approach and dogged attacks on Wall Street have resonated with voters looking for someone who understands the crush of debt and the shackles imposed by student loans. TidalWave Comics is proud to present this graphic nonfiction portrayal of one of the most outspoken members of the Senate and respected voices in the Democratic Party.

Written by Michael Frizell and featuring art by Pablo Martinena, “Female Force: Elizabeth Warren #2” a follow-up to the successful first issue also written by Frizell. The book uses sequential art to chronicle the early days of the Warren campaign and her rise to power.

“I call this chapter in her life ‘The Ragged Edges,’” said Frizell. “Elizabeth Warren is the first female Senator from Massachusetts and has experienced first-hand the struggle of the middle class.” In this issue, Warren adopts the belief that some financial institutions are too big to fail. “We see Warren battling Congress to relieve the burden of crushing student loan debt which holds back prosperity for millions as they struggle in the ragged edge of the middle class to achieve the American dream.”

Darren G. Davis, TidalWave Entertainment’s publisher and chief creative force, asks that the writers working for his company adhere to the mandate that the books skew positive while offering factual information in an entertaining way. “It is my hope that readers come away with a sense of the richness of the lives of our subjects. I was once a reluctant reader, and I found early-on that comic books engaged me in ways other mediums didn’t.”

Artist Pablo Martinena said, “I was able to go through the life of Elizabeth Warren while I was drawing the pages of this biographical comic.  She is a fighter woman, and a clear example of tenacity and dedication. Therefore, it is fair to recognize her hard work. Only someone with a strong heart can overcome them (challenges)”.

The biography comic form allows TidalWave’s talented writers to delve into the history of certain newsworthy figures and explore the past which shaped them. TidlaWave Entertainment’s biographical comic books have been featured on CNN, Politico, Roll Call, The Today Show, FOX News, and in People Magazine among thousands of others.

“Comics promote literacy,” said publisher Davis. “It’s my hope that in addition to fans of the candidate that younger readers will learn something about how our political process works.”

“Female Force: Elizabeth Warren #2” is available for order wherever you can buy print books. 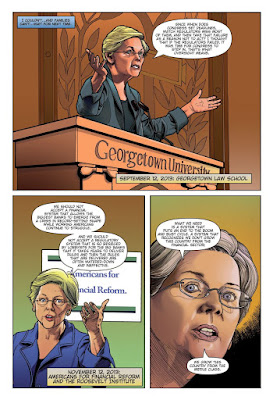 The first installment of the “Female Force Elizabeth Warren” is also back in print for a limited time as well with an updated cover.