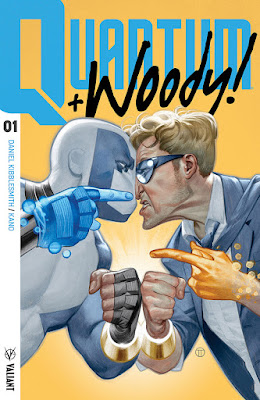 One thing you can always count on with Valiant books is that the contents page will include a summary telling you everything you need to catch up, even if it’s your first time reading the title.

I believe the re-cap in this issue is the best yet. Clear, complete and concise:  “Adoptive brothers Eric & Woody Henderson, while investigating their father’s murder, fall victim to a scientific accident gone wrong.  Now, they must KLANG their wristbands together every 24 hours or else they’ll be pulled apart by the quantum forces that empower them.  Together they fight crime - - when they’re not fighting each other.”  Well done.

Next, let’s move onto the main item of anticipation for former readers of Quantum and Woody, as well as fans of humorous  superhero books:  is the book funny?

Superhero books need to have a certain amount of action and drama in order to keep readers coming back.  Throw some comedy into that mix and it becomes harder to reach the proper balance. Most fail, and stretch the humor too far to the point of being stupid or juvenile.

To be fair, I realize that I am probably not the target audience for Quantum & Woody, or any of the funny super-hero books. There’s no denying their popularity, as the plethora of Deadpool titles (ugh) will attest.  (Equal time for Squirrel Girl and Harley Quinn as well).

Yes, QUANTUM & WOODY is funny - - just not in a way that I can appreciate.  Valiant even made the wise move of assigning the script to Daniel Kibblesmith, a writer for The Late Show With Stephen Colbert (although that’s political humor almost exclusively).

There’s a few clever lines, but nothing to cause a chuckle or a smile. Okay, maybe a smirk. Again, to be fair, I didn’t even consider the initial 1990’s run of QUANTUM & WOODY written by Priest (a writer I admire) to be that funny.  The more recent volumes of QUANTUM & WOODY haven’t tickled my funny bone either.  The only superhero funny books that I can recall as hitting that delicate balance (action, drama, humor) have been the early run of DEADPOOL (when Palmiotti was involved in the writing) and Fred Van Lente’s run on ARCHER & ARMSTRONG.

However, I like this book — just not for the reasons I anticipated I might. It’s definitely worth checking out through the first story arc. What I like most is how many future story elements that Kibblesmith introduces in this issue. Most superhero funny books stick to a single theme per issue, sometimes monotonously.

So, what happens in Issue 1?  Quantum and Woody appropriate an ice cream truck (complete with frightened driver) to chase super-villain Dr. Unfathomable, a chase scene that is short and sweet and sets up the puzzle at the root of the book:  While Q & W must hang together and strike their quantum bands every 24 hours - - do they really want to spend this much time in each other’s company? Kibblesmith suggests that the answer is no, and that sets up the main conflict. It will be interesting to see how he plays it out. 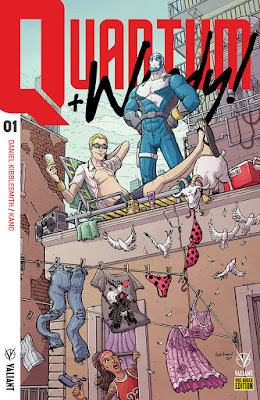 There are enough things I liked about Issue #1 for me to hold back from rating it lower and suggesting that readers pass it by.  This is what QUANTUM & WOODY has to offer:

STORY:  A good establishing point. However, I have to take away for not hitting the funny target.  1.5 POINTS.

ART: The best reason to check out this book.  2.5 POINTS.

READ AGAIN? Only if you enjoyed the first reading enough to want to repeat it.   0.5 POINTS.

RECOMMEND? I think fans of Q & A and superhero funny books need to give this a chance.  0.5 POINTS.

TOTAL RATING: 6 POINTS. Middle of the road. Can go either way. 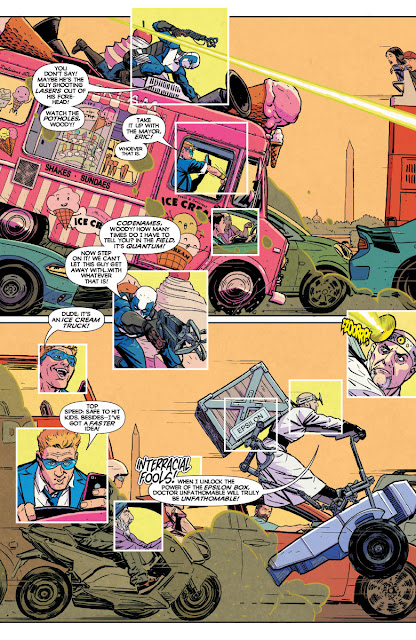