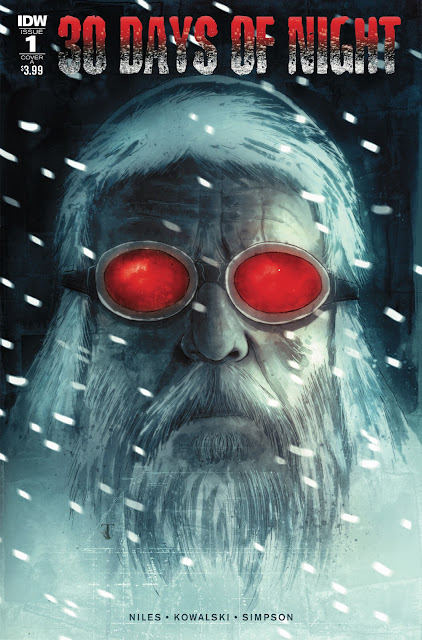 Back in 2002, the original 30 DAYS OF NIGHT helped launch the careers of writer Steve Niles and artist Ben Templesmith. The successful 3-issue mini-series spawned several sequels as well as a movie adaptation. Upon its’ 15th anniversary Niles returns to re-tell the story, this time with 6 monthly issues and a new artist. Templesmith returns just to contribute a cover, but it’s one of his absolute best covers ever.

The story centers on a vampire infestation of a small Alaskan town.  Barrow, Alaska is the northernmost community in North America, with temperatures averaging below zero and a good part of the year spent living in 24-hour darkness. The sun never rises between November 18 - January24 every year. That makes it ideal for sunlight-sensitive vampires to have an extended vacation.

Issue #1 opens with an introduction to Barrow, as it’s residents get ready for the long dark winter.  Sheriff Eben and his wife Deputy Stella leave their home on routine calls (vandalism, drunken behavior and wife beating) that seem just a touch off the normal. It seems like the sheriff may have a doppelgänger, and maybe the wife beater as well.

In an interview with Comic Book Resources, author Niles explained that the new series would not be an exact re-telling and promised some new twists.  The body double is a good start, ending the issue on a mystery.  However, things move along in Issue #1 at a pretty slow pace.  There are no signs of vampires so far, just some figures in the snowy woods where they shouldn’t be along with an odd campsite. 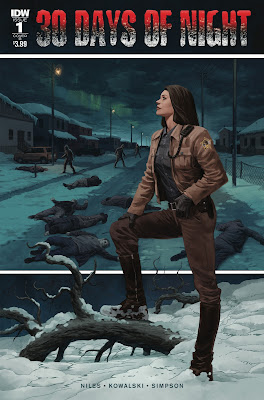 STORY:  If the reader was completely unaware of 30 DAYS OF NIGHT, this would appear to be just a mystery in an unusual setting. It’s a little too slow for me. I look for Niles to ramp up the action in Issue #2. 1.5 POINTS.

ART: Kowalski is as different in style from Templesmith as you can get. His style is straight forward and goes for realism and details whereas the first version was heavily expressionistic.  I look forward to the story being illustrated in Kowalski’s style.  2 POINTS.

COVER: I love the spooky Santa in shades. 2 POINTS.

READ AGAIN? Not necessary. In fact, readers could wait until Issue #2 to jump onboard and could still follow the story without much problem.   0 POINTS.

RECOMMEND?  The first series is a classic of horror comics. This version still has to prove itself.  0.5 POINTS.

TOTAL RATING: 6 POINTS. Middle of the road. Use your own discretion.