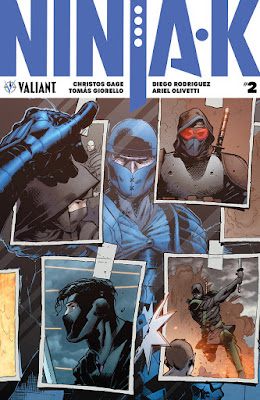 You should be reading this book, especially if you like action adventure, ninjas, mystery and characters that will remind you of the best aspects of James Bond.  If you haven’t picked up Issue #1 yet, here’s a quick re-cap to help catch you up . . . . .

Colin King a.k.a. Ninja-K is the current agent for MI6 as well as a freelance mercenary/assassin.  Past agents of the Ninja program are being killed, most recently Ninja-D (from the 1950’s), and King is seeking answers to help end the murders.

I love the way this story is being told, both for Gage’s character insights and dynamic dialogue, the mystery elements of his tale - - and for Giorello’s expressive art style.  This book is a pure joy to read.

The story begins with a flashback to the past of agent Ninja-C in 1952 Wales. His friendly conversations with a woman in pub cause him to question his career path and long for a simpler, more normal life.  Following a successful mission, he feels remorse for his lost opportunity.  His glib agency handler offers him high class broads and booze and sums up the situation:

“Everyone lives with death, lad.  The difference with us is, we’re honest about it.”

Cut to the present day, and Ninja-K is questioning D-3, the last living backup to Ninja-D, before an event interrupts the interrogation.  King’s only lead is to learn more about Ninja-D’s post-retirement work and a possible connection to his shape-shifting mistress Madame Charade. 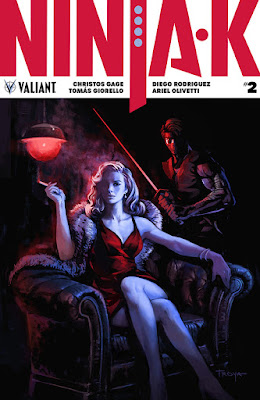 Fade out to an aristocratic estate in Luxembourg, the current residence of Madame Charade, who’s no longer able to maintain her sultry appearance and is homebound, not by choice. The exchange of dialogue between the two is worth a second reading to catch all the nuances and hints.

This leads King to an abandoned Ninja program training facility where he uncovers some past unethical practices before finding himself in a fight with the still-living Ninja-C.

The art is superb, as I’m learning to expect from Giorelli. Even in the non-action scenes the illustrations are worth lingering over. Panels overlap each other in a creative flow that moves the story along. Characters step outside the panel images and sometimes overlap one-third of the page or more.

The art in the opening sequence is a change in style, assisted by de la Torre.  The scenes are shared and colored in a creative way to give it a period feel.  Well done, although I prefer leaving Giorelli to his own devices.

If that wasn’t enough reason to pick up this book, there’s a cool back-up story about the beginnings of the Ninja program during World War I and the first agent, on loan from then-Allied Japan. Ninja-A needs to thwart the use of a new deadly nerve gas and drops in on a German airbase. There's a clever reference to a former title that Ninjak appeared in during a warm room scene, when one general asks why they couldn't utilize Unit Y for the mission.

The art by Olivetti on the back-up feature, which will continue in coming issues, is a real knock-out. The photo-realistic action and incredible background detail is something that needs to be seen. 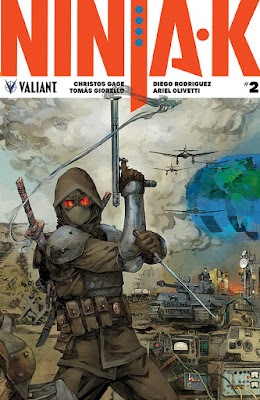 STORY:  The story will pull you in, as Gage puts Ninja-K through the wringer as the mystery deepens.  3 POINTS.

ART: A great example of the best in modern age comic art. 3 POINTS.

READ AGAIN? More than once for sure. And when this story arc ends, I want to give it a binge-read from the beginning.  1 POINT.

RECOMMEND? Everyone should at least check out an issue or Ninja-K. You may just hang around for more.  1 POINT. 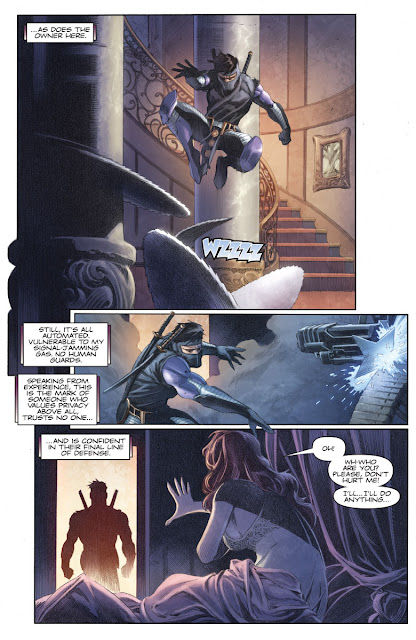