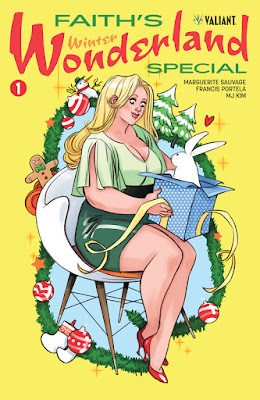 I have a soft spot for good stand-alone comics. There is nothing better than a great story told in one issue. Ordinarily, that would be more than enough reason to recommend this book.  However, the message lying underneath this story (for those who care to recognize it) is a sorely needed salve for the soul.  We all can benefit from a dose of Faith right now.

I can’t help sympathizing with all good-natured parents trying their best to raise their children and develop them into adults of integrity. How do you screen your innocent child from exposure to our 24/7 constant media barrage of news?  How do you answer their questions after they learn about the constant stories of dishonor, disrespect, abuse, inappropriate feelings of entitlement — among both our celebrities and mean-spirited politicians?  Children need good role models more than ever.  If we can’t find them in the real world, then the fictional world is our only hope.

FAITH’S WINTER WONDERLAND SPECIAL is an allegory of the loss of innocence. It’s entirely appropriate to read to young minds because of the underlying themes and the ending is happy, pure and simple. There is Hope if you have Faith.

The story occurs during the Christmas season and opens on a splash page revealing a fantasy world with notes of both Dorothy’s Oz and Alice’s Wonderland.  The whimsical art details clothed animals walking on two legs and various cartoonish humans. A few pages later, readers learn that it is a version of Lewis Carroll’s Wonderland.

The conflict is not whimsical. The Queen of Oblivion is threatening to devour Wonderland. King Bear sends Mister Rabbit through a portal to find “the exceptional one” to assist in locating Alice, their savior.

Segue to a flashback from Faith Herbert’s (a.k.a. Zephyr) early years as she watches a television episode of “A Wonderland.” Flash forward to present day, and Rabbit locates Faith easily thanks to a just-purchased memorable Christmas card.

What makes Faith “the exceptional one”?  Rabbit provides the answer while persuading her to travel to Wonderland: “You are strong, but gentle.  Powerful, but kind.  You have saved this world many, many times . . . but most importantly . . . you still have a child’s soul.  The world has not broken you.”

The outside world has creeped into Wonderland to corrupt the Queen.  Children’s entertainment has been manipulated by crass commercialization and consumerism.  Readers may figure out where Alice is hiding before Faith does, but it won’t spoil the story. 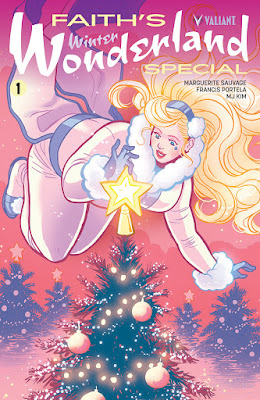 STORY:  Simple on the surface, but layered with meaningful messages. More importantly, it doesn’t require a multi-issue saga to makes it’s point. Done in one.  3 POINTS.

ART: Very complimentary to the story, a perfect blend. The inks and colors are just right. 3 POINTS.

COVER: Multiple covers, but the best ones make it clear this is a Christmas story to treasure. 2 POINTS.

READ AGAIN? Every Christmas season, for sure. Plus anytime I need to read about a fictional heroic character.  1 POINT.

RECOMMEND? Well-done complete-in-one-issue stories are to be treasured. Everyone should get this book.  1 POINT.

KEEPER?  I only utilize this additional rating when a story deserves to join the limited company in my desert island short box of comics. 1 POINT.

TOTAL RATING: 11 POINTS. A rarity, and a gem.  This is a comic I will return to and read aloud to my grandson in a few years. 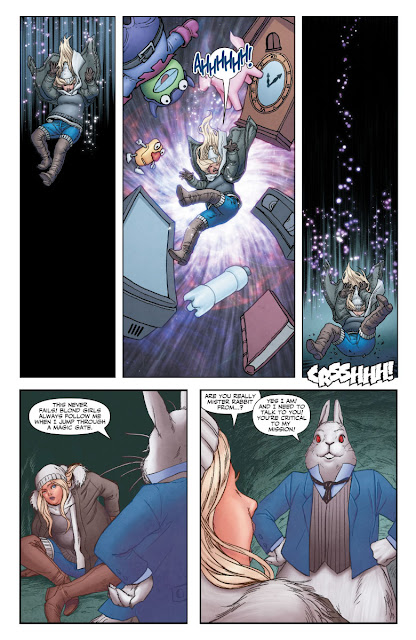